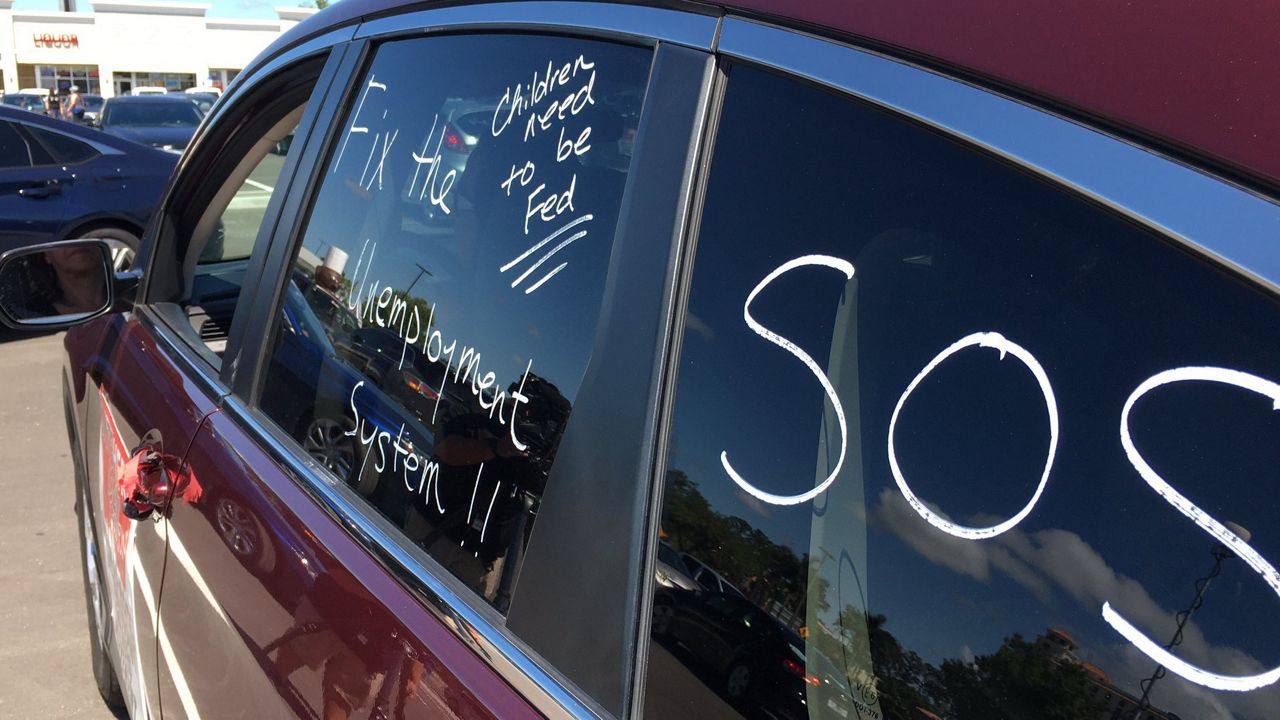 One of the vehicles that took part in a protest caravan along International Drive in Orlando Monday. (Greg Angel, Spectrum News)


Florida Department of Economic Opportunity released data Monday showing they have provided at least partial state and/or federal benefits to 656,635 people since March 15.

“I would tell people to check the bank account as today goes on, a whole bunch of money is going out with direct deposit,” DeSantis said Monday.

FL DEO has paid more than $591 million in state benefits out of their $4 billion fund, in addition to $960 million in federal benefits.

Many continue to complain, however, that the system is riddled with problems and errors as they face another month without any benefits.

Officials with DEO said starting Monday, May 11, applicants will be required to log into the CONNECT system every two weeks to claim benefits and to verify weeks not worked. This is also required by federal law to receive federal benefits.

DeSantis, however, said during Monday’s news conference that he extended this waiver, which early indications appear not to be true.

Today in Fort Myers, @GovRonDeSantis said he extended until end of the month the waiver foregoing requirement to claim benefits / verify weeks not worked.

NOT TRUE. That is NOW a REQUIREMENT as of TODAY.@MyNews13 @BN9 pic.twitter.com/qnc6v2m9vi

“We also extended the waiver for doing two weeks recertification until the end of the month and we did that partially because in Phase One it’s not like the economy is 100 percent back, but then two. We really want to use the system to process as many payments as possible, and if you have 500,000 people going on just doing that, when we know they’re probably still unemployed, probably better to waive that for the time being and further waive it and focus on processing,” DeSantis said Monday.

The governor’s comments conflict with what the DEO has previously said, which is applicants do have to verify weeks not worked and claim benefits every two weeks.

Spectrum News is awaiting clarification from both FL DEO and the governor’s office.

The CONNECT system appeared to continue to be plagued with errors and problems Monday as the new requirements kicked in.

“They won’t give me a reason why, I call them up and all they say is ‘I’ll have to call you back',” said Catherine Collins.

Collins is among the majority of Walt Disney World’s 77,000 cast members furloughed April 19. She has worked for Disney’s restaurant services for 27 years, and is currently a hostess at Ohana restaurant at Disney’s Polynesian resort.

Collins said she has been deemed "ineligible" twice by FL DEO despite her long tenure of work in Florida, and has not been able to get a clear reason why.

“It just makes you feel very uncomfortable, I’m not used to this,” Collins said.

Clearly emotional, she describes the financial and emotional debt building from not having access to unemployment benefits as her monthly bills continue to stack up.

Collins is not alone.

“Thousands and thousands of full time employees at Disney have been deemed ineligible with no explanation,” said Jeremy Haicken, president of Unite Here Local 737, which represents more than 40,000 Central Florida tourism workers, including many food and beverage and housekeeping cast members at Disney.

Since Spectrum News started reporting on the surge of “ineligible” determinations several weeks ago, FL DEO would only say there is likely information missing from a person’s application.

Neither DEO nor the governor’s office would provide clarity on how specifically the agency is addressing those concerns, nor how they’re specifically addressing applications filed in March that people say have continued to stall.

Spectrum News has spoken to hundreds of people who are still waiting for approval and benefits, saying either their information is fully in the system, or having issues they say exist with the system.

Dozens of people have told Spectrum News they later found when DEO transferred their application from the Pega website to the CONNECT system, their salary information was zeroed out to $0, thus marking them as “ineligible” for not earning enough for benefits.

DEO has not responded directly to this issue.