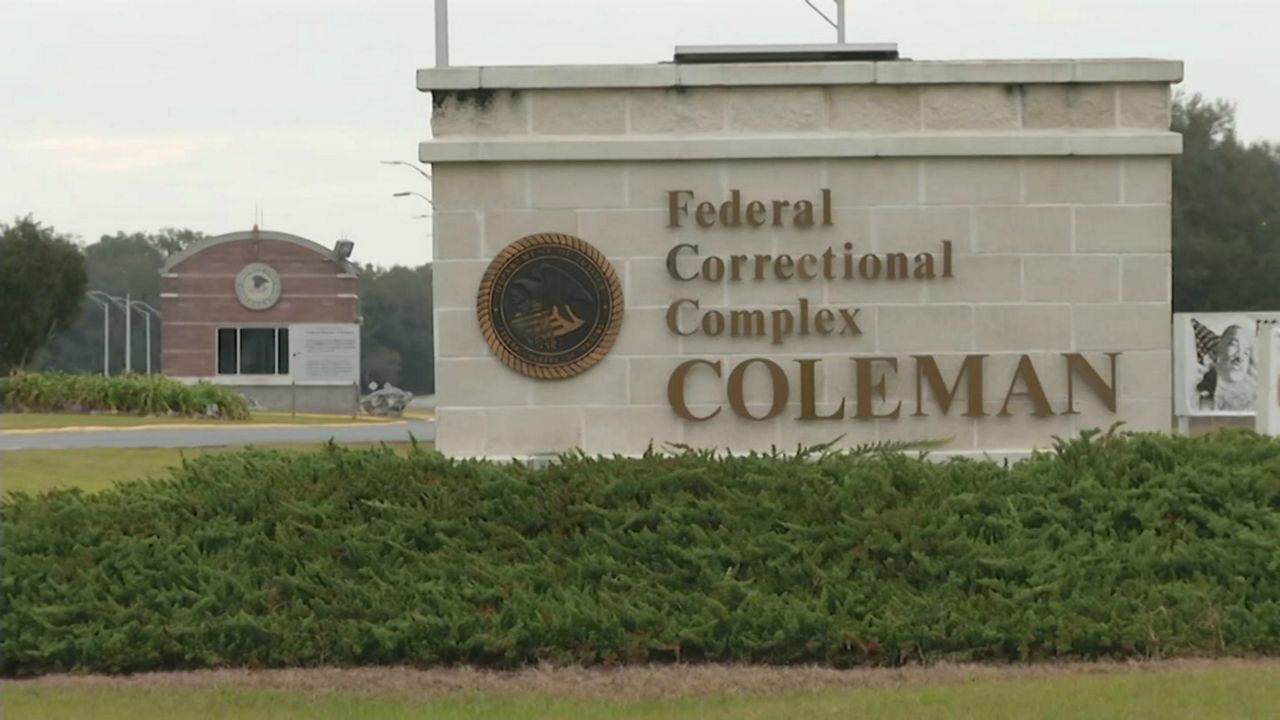 ORLANDO, Fla. — Another inmate has died at the federal prison in Sumter County where hundreds reportedly have coronavirus.

An inmate at the medium security facility died earlier this year.

“I should not be telling my great nephews that their momma is gone, and she’s not coming back,” Holmes shared. “You do a crime ... you need to do your time. But it doesn’t have to be your life! It was her life. She’s gone.”

For months now, our Watchdog team has been reporting on the rising number of cases at FCC Coleman, and asking federal officials why they're not releasing more non-violent offenders to home confinement, despite U.S. Attorney General William Barr's order to do so.

BREAKING: 36 yr old FCC Coleman minimum security inmate has died from Covid-19. Coleman has an outbreak with hundreds of imates and dozens of staff testing positive. The #s as of 10 AM on BOP’s website do not reflect Saferia Johnson’s death. @MyNews13 pic.twitter.com/5H8sBLcZ4R

According to the BOP, Johnson had long-term, pre-existing medical conditions. As a non-violent offender, she met compassionate release or home confinement criteria.

“She has two little boys that I take care of -- two little boys. They don’t have their mom. Their mom is gone. I believe they killed her. They killed my niece because they did not give her the proper care,” Carol Holmes said.

This is Saferia Johnson & her 2 sons. Johnson died from Covid-19 yesterday at FCC Coleman. A non-violent offender w/pre-existing conditions, she met federal home confinement criteria but died in prison. Cases there ⬆️ Many wonder why more inmates aren’t being released. @MyNews13 pic.twitter.com/KUhwnN9FSS

Ludovic Francois says his mother, who is also an FCC Coleman minimum security inmate, was set to be released on home confinement before the BOP reversed its decision. Francois’ mother is currently in isolation after testing positive for coronavirus.

“There’d be times at night that I can’t even sleep, because I’m worried about my mother,” Francois said.

After sending our previous Watchdog investigation to U.S. Rep. Darren Soto, D-Florida, he called the skyrocketing cases among inmates and staff “unacceptable.”

“The federal government has a duty to prevent these outbreaks, and we’ll be putting together a letter along with this news coverage — all of it is helpful,” Soto said.

These are only active and open cases, not the total number of cases at the facility. In an interview with Stephanie Coueignoux last month, Jose Rojas, the vice president for the Southeastern Regional Prison Union, said the reality was much worse, and not everyone is tested.

“You’re walking into a mine full of bombs not knowing who is positive and who is not,” Rojas said.

Spectrum News has asked the BOP how many FCC inmates are currently on home confinement, along with how many inmates qualify. A spokesman says they do not release numbers for each facility.

Additionally, we have repeatedly asked the BOP and FCC Coleman officials for interviews. They have declined our requests.

Rep. Soto says he expects to send his letter to the BOP and other agencies by the end of this week.