Biden’s Economic Appointees, Nominees Pledge to Work for All Americans: "Help Is on the Way"

WILMINGTON, Del. — President-elect Joe Biden and Vice President-elect Kamala Harris formally introduced nominees and appointees to key economic policy positions on Tuesday, with Biden calling the group a “first-rate team that's going to get us through this economic crisis.”

Many on Biden’s team of liberal advisers have long focused on the nation’s workers and government efforts to address economic inequality. All are outspoken supporters of more government stimulus spending to boost growth, a major issue with the coronavirus pandemic cramping the U.S. economy.

Some, like Janet Yellen, are likely to face swift confirmation hearings after receiving bipartisan support for their nominations. Republican Senator Chuck Grassley told reporters Yellen “would get a favorable view” from his colleagues, with Democratic Senator Elizabeth Warren calling Yellen “an outstanding choice” for Treasury Secretary.

Others, such as Neera Tanden, Biden’s pick to lead the Office of Management and Budget, are likely to face a more arduous uphill battle in their confirmation hearings.

Some Republicans are expressing doubt that Tanden could be confirmed by the Senate after she spent years attacking GOP lawmakers on social media — and many panned the choice.

But both Biden and Harris touted the experience of their economic team on Tuesday, with the president-elect calling the group a “tested and experienced” bunch that "includes groundbreaking Americans who come from different backgrounds, but share my core vision for economic relief here in the United States of America."

Following remarks from the assembled nominees and appointees, Harris congratulated President-elect Biden on “choosing this outstanding team of brilliant minds,” adding: “this is the right team for this moment.”

“This is the team we need to deliver immediate economic relief to the American people to get our economy back on track, and to make sure it works for working people,” Harris continued.

Here is what Biden and his nominees / appointees had to say: 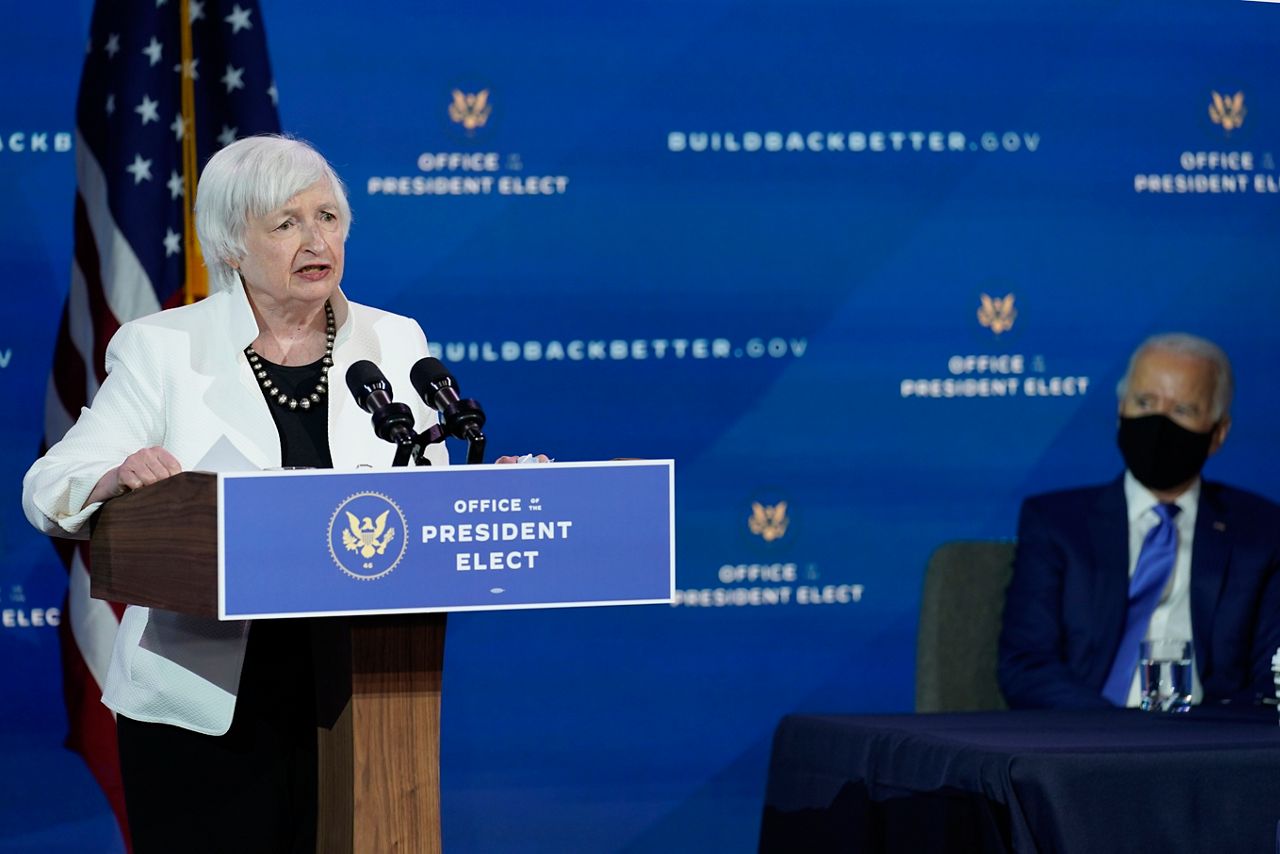 Many members of Biden’s incoming administration will make history as the “first” in their respective positions — and one such person is Biden’s pick for Treasury Secretary, Janet Yellen. If confirmed by the Senate, Yellen would be the first woman to lead the department.

Yellen, who was the first of Biden’s nominees to take the microphone following the president-elect’s address, said she was honored to be nominated for Treasury Secretary “at this moment of great challenge for our country.”

“I've spent my career trying to make sure people can work and achieve the dignity and self worth that comes with it,” Yellen said, adding: “I’ve heard you say this before, Mr. President-elect. Out of our collective pain as a nation, we will find collective purpose to control the pandemic and build our economy back better than before.”

“... Above all, we share your belief in the American dream — of a society where each person, with effort, can rise to their potential, and dream even bigger for their children,” Yellen concluded. “I pledge, as Treasury Secretary, to work every day towards rebuilding that dream for all Americans.”

Director of the Office of Management and Budget: Neera Tanden One of Biden’s more controversial picks is Neera Tanden, who is quickly emerging as a political battle that could disrupt his efforts to swiftly fill out his administration.

Tanden, a former adviser to Hillary Clinton and the president of the center-left Center for American Progress, has a history of political combat. Tanden is well-known for tweeting critical views of GOP lawmakers, famously slamming Sen. Susan Collins for voting in favor of Brett Kavanaugh, President Trump’s appointee to the Supreme Court.

But Biden on Tuesday said Tanden has a “brilliant policy mind with critical, practical experience across government.”

Should she be approved, Tanden would also make history with a “first,” becoming both the first-ever woman of color and first South Asian American to lead the OMB.

“She was raised by a single mom on food stamps, an immigrant from India who struggled, worked hard, and did everything for her daughter to live out the American dream,” Biden said of Tanden. “And Neera did just that. She understands the struggles that millions of Americans are facing.”

Tanden also spoke of her upbringing in her own address, saying her mother “came to America to pursue a better life.”

“And now it is my profound honor to help shape those budgets and programs to keep lifting Americans up, to pull families back from the brink, to give everybody that fair chance that my mom got, and that everybody deserves,” she concluded. 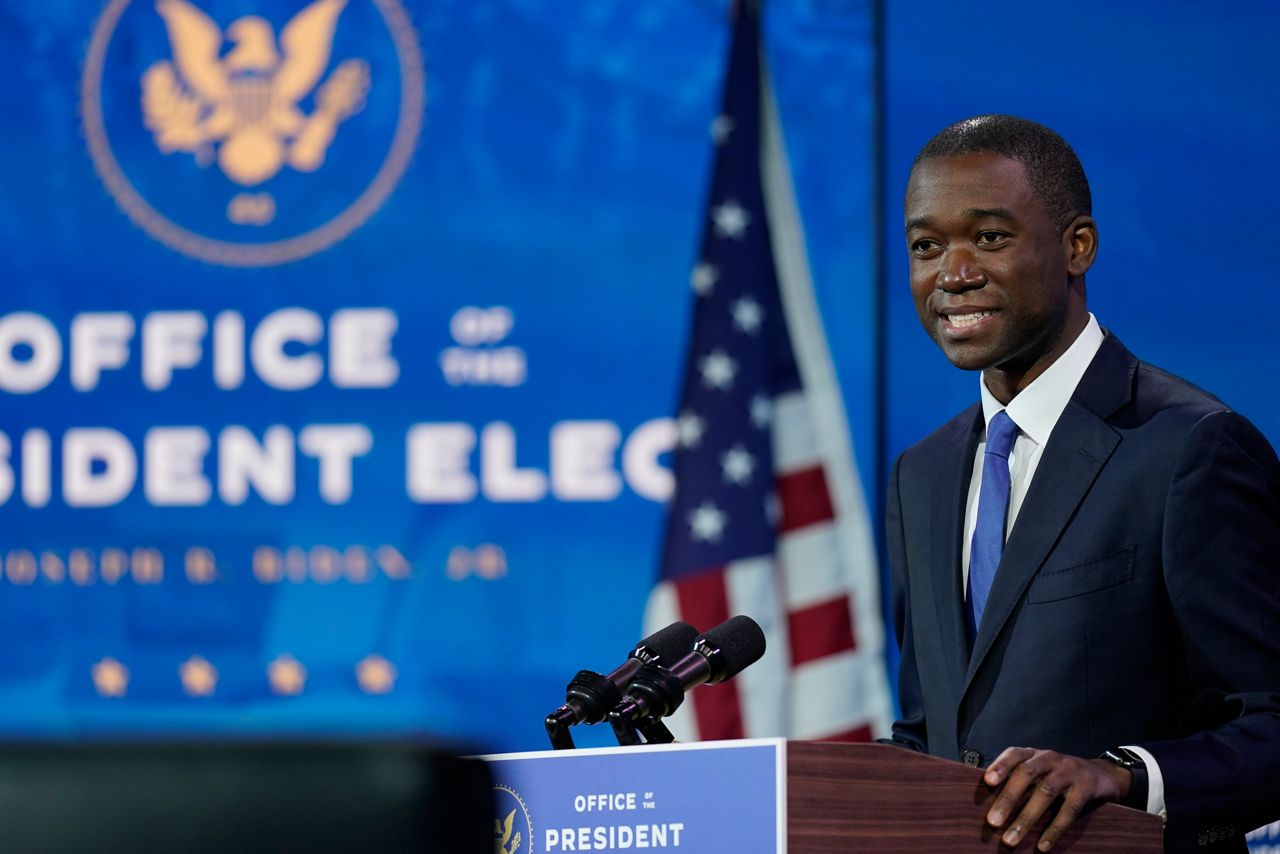 Biden’s third history-making pick of the day was Wally Adeyemo, former Deputy National Security Advisor to President Obama and the president-elect’s pick for Deputy Treasury Secretary. Should Adeyemo be confirmed, he would become the first African-American to ever hold the post, and would be the highest-ranking African-American in the department’s history.

Calling Adeyemo a “skilled leader and thinker on issues ranging from macroeconomics to consumer protection, and from national security to international affairs,” Biden said his nominee “understands everything we do is for the people.”

Adeyemo delivered a rousing and hopeful address from the podium, where he said despite the immense challenges facing the nation, “the American people can do anything when given a chance.”

Calling on his previous experience as a national security adviser during the Obama administration, Adeyemo said it is imperative that the Treasury remains “laser-focused” on its own role in protecting the security of the nation.

“This includes using our sanctions regime to hold bad actors accountable, dismantling the financial networks of terrorist organizations and others who seek to do us harm, and ensuring our foreign investment policy protects America’s national security interests,” Adeyemo said. “The challenges before us today are unlike anything we have ever faced.”

“I’m honored to be a part of this talented team, to get to work with them and all Americans, to build an economy that gives everyone that chance, and turns our nation once again from crisis to hope,” he concluded.

Chair of the Council of Economic Advisers: Cecilia Rouse 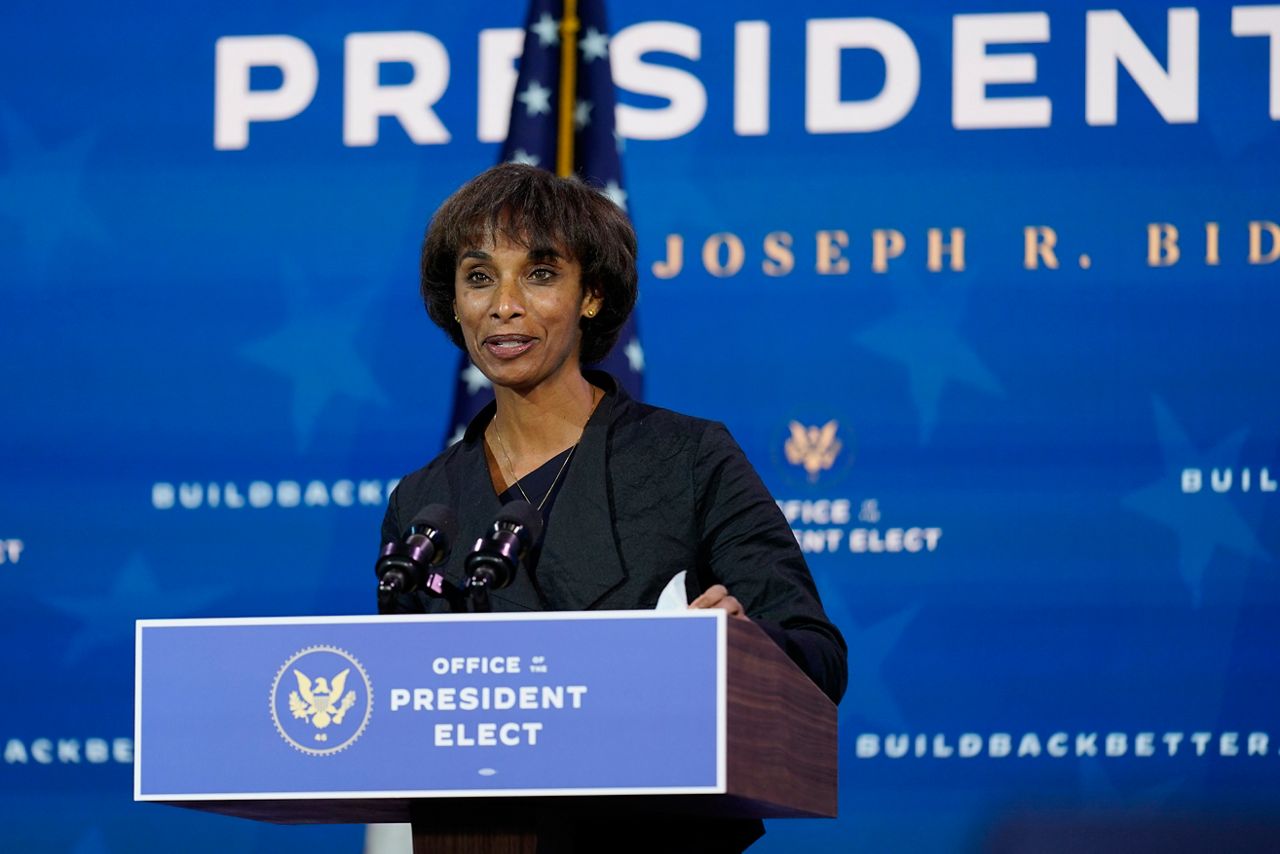 Biden introduced Cecilia “CC” Rouse as a member of his incoming cabinet on Tuesday, calling her “one of the most distinguished economists in the country.”

Rouse, Biden added, is an expert on labor economics, race, poverty, and education — all issues the president-elect has put at the forefront of his incoming administration.

In her own address, Rouse claimed that until recently, she “did not anticipate” a return to public service. But the “rare combination of urgency and opportunity” facing the country, Rouse said, is what finally encouraged her to leave academia behind in favor of joining the Biden administration.

“This is a moment of urgency and opportunity unlike anything we’ve faced in modern times. The urgency of ending a devastating crisis,” Rouse said. “And the opportunity to build a better economy in its wake — an economy that works for everyone, brings fulfilling job opportunities, and leaves no one to fall through the cracks.”

“I look forward to working with the President-elect, the Vice President-elect, and this entire team to address that urgency and seize that opportunity — and make our economic system work better for every American,” she concluded. Jared Bernstein, who served as Chief Economist during Biden’s Vice Presidency, was appointed to a seat on the Council of Economic advisers, with Biden saying: “I couldn’t think of anyone else who I would want by my side to face the challenges ahead.”

The two worked together during the country’s previous economic crisis. “He was there in the foxhole during the Great Recession with the economy on the brink and our country on its back,” Biden said of Bernstein.

“I can always count on him to deliver it straight from the shoulder as his hero FDR said,” Biden added. “One thing I can assure you is working people will always have a voice with Jared on the Council.”

Bernstein couldn’t help but get sentimental during his own address, reminiscing over his many conversations with President-elect Biden on economic justice.

“In thinking about the path that brought me here, a good place to start is 12 years ago — almost to the day — when I met with then-Vice-President-elect Biden at his home not far from here,” Bernstein said. “It was supposed to be a job interview to be his chief economist, but it quickly turned into a conversation about economic justice and fairness — which, as many here know, is a common destination in conversations with the President-elect.”

“Over the years, we’ve continued that discussion,” he added.

Bernstein went on to praise the newly assembled team as “resonant and visionary,” saying: “Yes, they’ve stressed the urgent need to control the virus and provide the relief needed to help families and businesses get to the other side of this crisis. But they’ve been just as adamant that simply getting back to where we were sets the bar too low — we must build back an economy that’s far more resilient, far more fair, and far more inclusive.” Heather Boushey, who advised then-candidate Biden on “addressing the structural inequalities in our economy” over the course of his campaign, will join the incoming administration as a member of the Council of Economic Advisers.

Biden on Tuesday said he will continue to lean on Boushey’s counsel as president, as economic inequality is “a central issue of our time.”

“She is one of the foremost economists working to make sure we build an economy that works for all Americans,” Biden said of Boushey. “A daughter of a union family — it’s no wonder she believes so deeply in the idea: leave no one out, leave no one behind.”

Boushey reiterated Biden’s statements during her own address, saying she is “excited to get to work helping build an economy rooted in the values we share: Equality, opportunity, and the dignity of work.”

“I’ve dedicated my career to figuring out how we can grow and sustain the middle class — and uproot the gender barriers and racial barriers that leave too many Americans outside the Dream, looking in,” Boushey said. “Through the organization I co-founded, I’ve pursued solutions to reverse the dangerous march of inequality, and bring us back to the core value of broadly-shared success.”

“That’s the same value I see at the heart of the Build Back Better plan — and it’s why I’m excited and honored to help this team bring not just good jobs — but the good lives and peace of mind that come with them to every American community,” Boushey concluded.