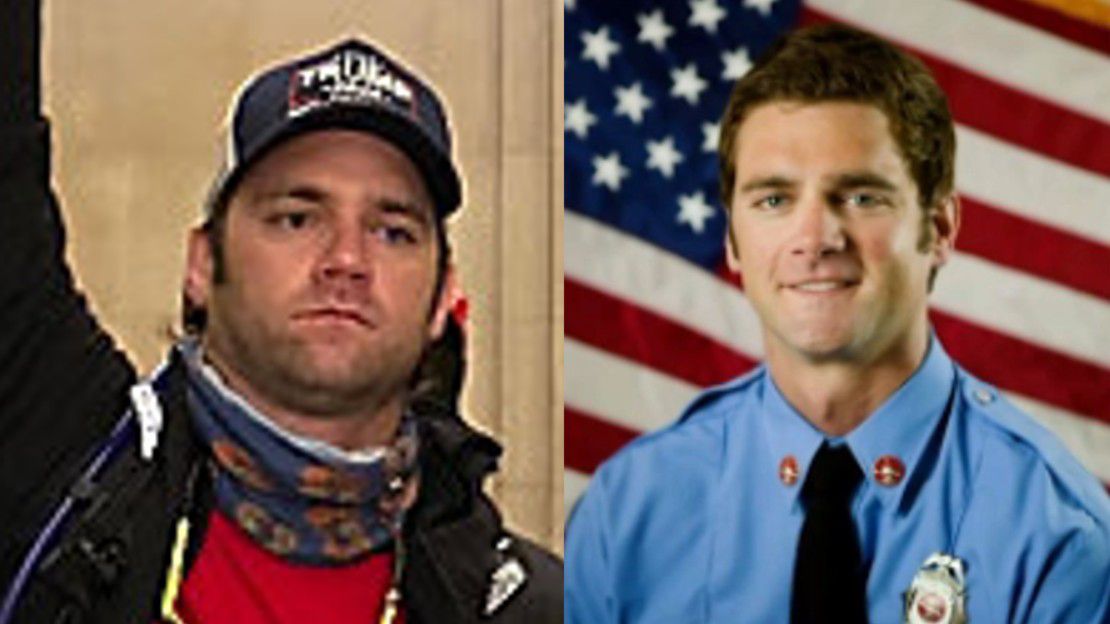 The Sanford Fire Department is also investigating cell phone video that firefighter Andy Williams appears to have shot while among the mob that breached the U.S. Capitol on Wednesday. (Left photo provided by viewer, right is official portrait)

SANFORD, Fla. — A Sanford firefighter seen in a picture posted on social media pointing to a sign inside the U.S. Capitol Building during last week's Capitol breach has been charged in connection with the violent pro-Trump riot.

The FBI office in Tampa confirmed that Andrew James Williams was arrested and had an appearance in federal court Tuesday.

According to the Sanford Fire Department, Williams is facing charges of unlawful entry of a restricted building and disorderly conduct on Capitol grounds.

He is being prosecuted by the U.S. Attorney's Office in Washington, D.C. and is expected to appear in court there.

He was released shortly after his arrest Tuesday evening and while he was silent, his attorney Vincent Citro seemed to pass all the blame on to President Donald Trump and law enforcement.

“The president and the capitol police encouraged despicable behavior, Mr. Williams took part in none of it,” Citro said.

But in Williams's own words he was confident at the time he wouldn’t be held responsible.

“I don’t either, but how are they going to arrest every single person?” Williams said in part of a video posted to social media while inside the Capitol building.

This is moment @CitySanfordFL firefighter Andrew Williams left federal court after being arrested for his participation in #CapitolRiot. His attorney says @POTUS encouraged “despicable” behavior and that Williams “took part in none of it.” @MyNews13
🎥: Nick Allen pic.twitter.com/giYUgsKqeQ

Federal investigators say even if actors in the Capitol takeover only have minor charges now, more serious charges could be on the way.

“Now, after those charges are filed then we have the ability to then indict these individuals on more significant charges,” said acting D.C. U.S. Attorney Michael Sherwin.

Officials with the Sanford Fire Department confirmed last week that they were investigating cell phone videos Williams allegedly recorded during the violent siege of the U.S. Capitol on January 6.

The video is a first-person view of the mob as rioters marched up the Capitol stairs and into the building.

Last Thursday, officials said Williams was placed on paid administrative leave while they investigate the situation. But Sanford Fire on Tuesday said that Williams was now on leave without pay.

A picture posted on social media also appeared to show Williams pointing to a sign for the Speaker of the House.

Since his arrest, he has been put on unpaid administrative leave and the investigation into the videos was suspended "pending the conclusion of the federal criminal investigation."

“We hold the men and women in this department to the highest standards. It saddens me that the actions of one individual have tarnished the hard work and dedication that the rest of the department puts forth on a daily basis. Our investigation will continue in conjunction with the current federal criminal investigation.  As is policy with any type of policy violation, including a criminal violation, an internal administrative process must be followed in order to ensure a thorough investigation with a just conclusion. I ask for the public’s patience as we move through this process.”