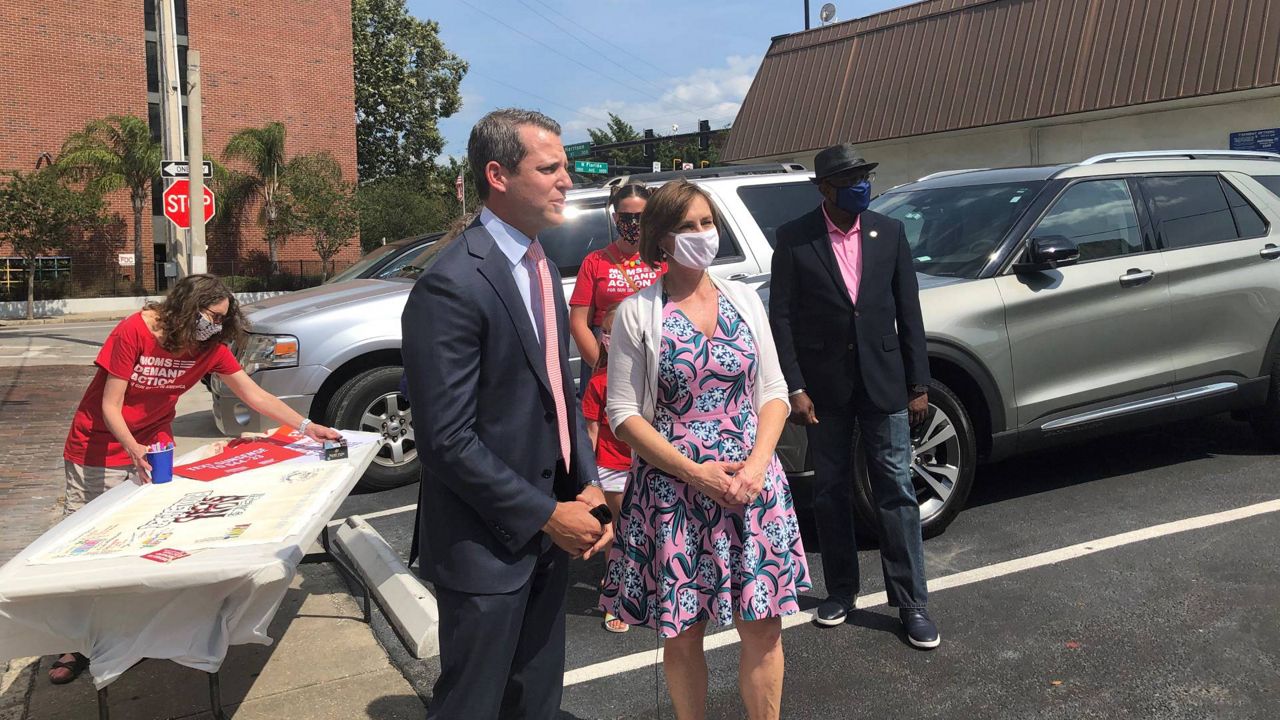 A bill that would expand background checks for gun purchases will soon go before the U.S. Senate, and it’s the top legislative priority for Moms Demand Action, a gun-control advocacy group that made the case for the bill in Tampa on Wednesday.

TAMPA, Fla. — A bill that would expand background checks for gun purchases will soon go before the U.S. Senate, and it’s the top legislative priority for Moms Demand Action, a gun-control advocacy group that made the case for the bill in Tampa on Wednesday.


The House of Representatives passed a bill (H.R. 8) last month that would mandate universal background checks, mostly along party lines. Eight Republicans supported it and one Democrat voted in opposition. It would expand federal oversight of gun sales, requiring unlicensed and private sellers to conduct background checks.

Currently, private sales that take place online or at gun shows by sellers who don’t have a federal license are not required to conduct background checks.

“The problem is the law has not been updated in over 25 years,” says Tampa Democratic Congresswoman Kathy Castor, referring to when the first background check law was passed as part of the 1994 ‘Brady bill.’

“Twenty-five years ago we didn’t have the internet,” she said. “So you didn’t have online firearms sales. You didn’t have a lot of these gun shows, so it’s very important to update the background check laws.”

“To be able to just purchase a weapon out in a parking lot like this, that should not happen,” added Tampa City Councilman Joe Citro, speaking in a parking lot where the news conference took place on Wednesday.

The Senate equivalent (SB 529) is being sponsored by Connecticut Democrat Chris Murphy.

Critics have contended that expanded background checks wouldn’t have prevented the two most recent mass gun shootings in Boulder and Atlanta.

Robert Aaron Long, the alleged shooter in Atlanta, purchased a handgun just hours before going on a shooting rampage at three massage businesses. Georgia has no waiting period to purchase a gun (Florida passed a mandatory waiting period between the purchase and delivery of any gun sold by a licensed firearm dealer).

A second gun control measure was recently passed by the House. That is the Enhanced Background Checks Act, which aims to close the “Charleston loophole” by extending the review period in which a background check can be conducted before purchasing a firearm in 10 days, up from the current three days.

References these gun bills that are supported by President Joe Biden, Florida Republican state Rep. Jason Shoaf is sponsoring a memorial (HB 1301) that “intends to use all of its lawful authority and power to resist or overturn any federal gun-control measure that violates the right of Florida residents to keep and bear arms.” It advanced in the House Judiciary Committee on Tuesday.

Polls have consistently shown strong support for expanded background checks. A Morning Consult/Politico survey released last month showed that 84 percent of voters support requiring all gun purchasers to go through a background check. That includes 77 percent of Republicans and 82 percent of independent voters.

Moms Demand Action is part of Everytown for Gun Safety, which calls itself the largest gun violence prevention organization in the U.S.