The announcement was made Monday morning while DeSantis visited St. Petersburg, and signed SB 2006. The law, passed during the Florida Legislative session, allows the state to override local emergency orders like the ones passed throughout Florida after the pandemic began.

While the new law not take effect until July 1, DeSantis issued executive orders Monday that would suspend local ordinances immediately.

“The bill ensures that neither the state or local governments can close businesses or keep kids out of in-person instruction unless they satisfy a demanding and continuous justification,” he said.

DeSantis said while COVID isn’t over, the need for emergency rules is. The executive order would also end mask mandates, however, private businesses can still require masks if they choose to. Once the new law takes effect on July 1, local emergency orders can only last 42 days and reapproving orders every seven days would not be allowed.

The governor and counties can overrule any city emergency orders if they restrict personal freedoms and liberties.

Businesses would also be banned from requiring vaccine passports.

On Monday evening, Florida's Department of Education clarified that the order does not apply to school districts or individual schools that have mask mandates and other COVID precautions in place.

"I conclude that his actions are part of a larger partisan strategy by the Republican Party to usurp the authority of Democrat-led urban counties and cities across America," Demings said. "We expect better from the governor of Florida."

Kriseman took to Twitter to express his feelings about the governor's action.

"Today, in preempting both local governments AND businesses from keeping their establishments safe, Ron DeSantis decided he cares not about public health, but power," Kriseman said.

In another tweet, the mayor said: "To be clear, cities like St. Pete, Tampa, Orlando, Miami and Miami Beach, saved Florida and the governor's behind throughout this pandemic. Can you imagine if each city had been led by Ron DeSantis? How many lives would have been lost? What would our economy look like today?"

Today, in preempting both local governments AND businesses from keeping their establishments safe, Ron DeSantis decided he cares not about public health, but power. I'm old enough to remember when Republicans at least pretended to be pro-business and for less government.

DeSantis' executive order was released later Monday afternoon. It does not appear to stop businesses from insisting on COVID regulations, such as requiring masks, as Kriseman said Monday morning.

“A year ago this week, we were reopening our dining rooms ... It hasn’t been the easiest year, but man, we’re so thankful," said Pete Boland, owner of The Galley: A St. Pete Tavern. 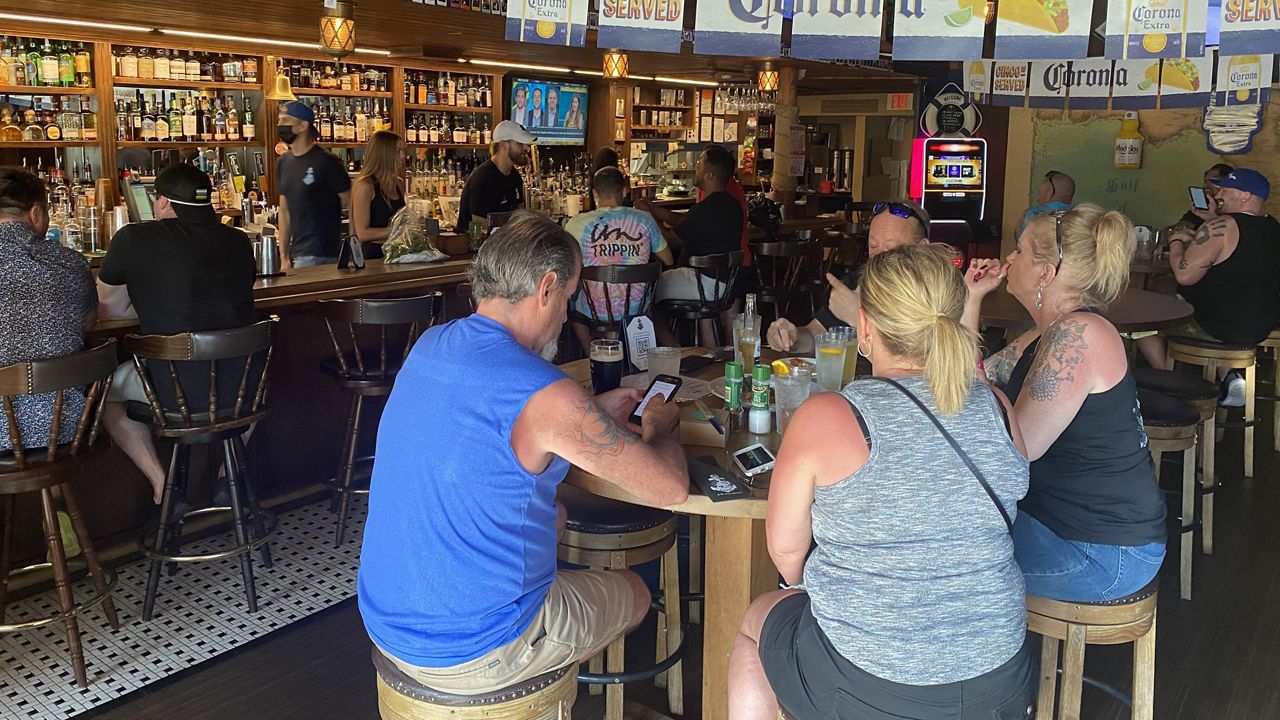 Patrons enjoying an evening at The Galley in downtown St. Pete on Monday, May 3, 2021 (Spectrum News/Trevor Pettiford)

But some people concede that it may take some time to really get back to "normal."

"I sure hope we get back to the old normal, but I think some people are always gonna feel a little strange about going about their normal lives like big gatherings, things like that," Largo resident Cayo Chermont said after DeSantis' announcement. "I personally don’t mind it. we live with the flu. We live with tons of other diseases. We’ve got to adjust and go on.”

During his Monday remarks, the governor slammed other states for their COVID regulations as well as officials who say people should still wear masks and social distancing after being vaccinated.

House Speaker Chris Sprowls praised DeSantis for his handling of the pandemic, comparing him favorably to the governors of New York and California.⁦

Spectrum News reported in March that St. Petersburg’s code enforcement department has issued more than 260 municipal violations to local businesses for violating the city's COVID-19 ordinance since last summer. Those were mostly related to employees failing to wear masks or socially distance.