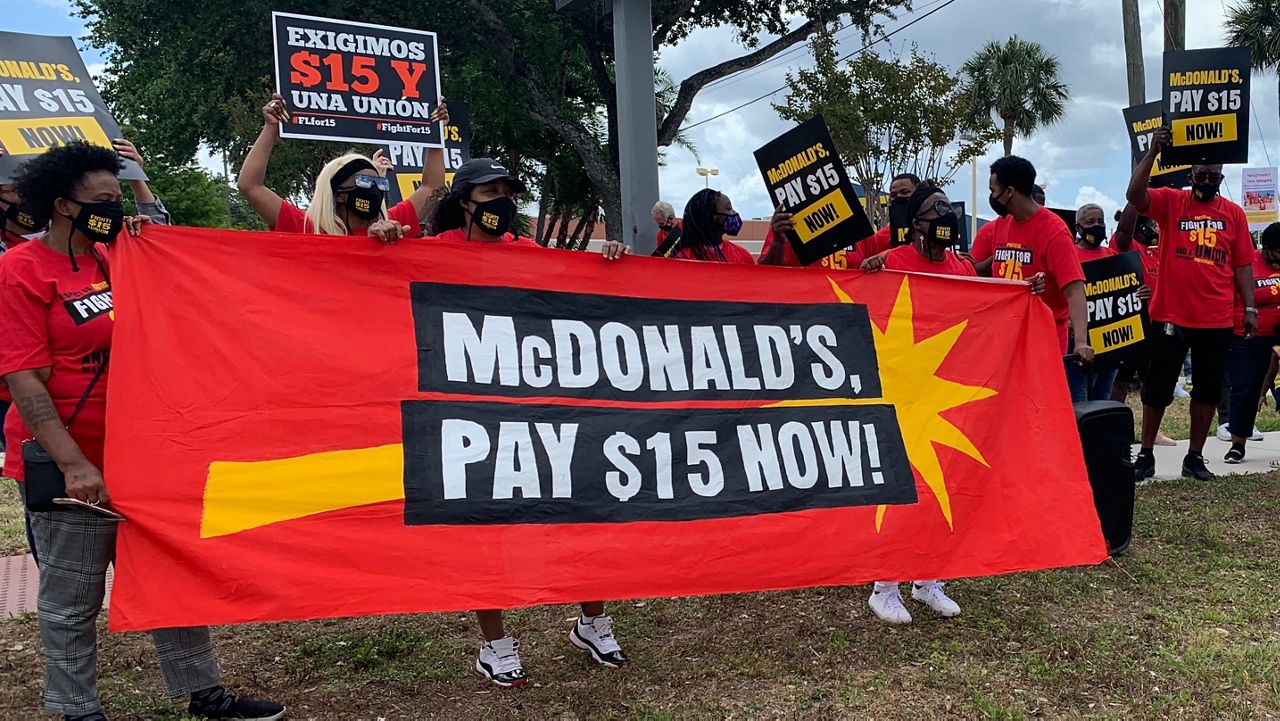 McDonald's employees in Tampa strike for a $15-per-hour minimum wage amid staff shortages and the COVID-19 pandemic. (Spectrum News/Fadia Patterson)

Editor's note: This story has been updated to include a statement from McDonald's USA.

TAMPA — As the fast food industry struggles with staffing shortages, McDonald's employees organized yet another strike.

They say the solution to the hiring crunch is raising the minimum wage to $15 an hour.

McDonald's employees have been asking for a pay raise since before the pandemic. However, they say as conditions got worse, they felt it was important to be paid like essential employees.

They're also looking to unionize.

"Ever since the pandemic started, we had to fight to get the proper equipment," employee Sade Andrews told Spectrum Bay News 9 on Wednesday.

Andrews was one of the youngest in the crowd. She says she's trying to support her family and save money to go back to school. Besides poor working conditions, she says the ongoing staff turnover has affected her directly.

"We're short of staff every night, so we have to work extra hard to get the job done," Andrews explained.

#NOW Fight for $15 Strike. McDonald’s employees from all of Tampa are asking for a pay increase of $15 and a union. @BN9 pic.twitter.com/iSF6vgr0iL

For Gale Rogers, getting to the strike and march was difficult. She is disabled and uses a walker to get around. After eight years on the job, the 61-year-old said she earns $9.60 an hour.

"Before I started working at McDonald's, I was working at the federal courthouse," she said.

Rogers says she left her union job to care for her ill mother and husband.

When Rogers got sick herself, she says she was at a loss because of the limited benefits she's offered at work.

Rogers hopes to improve conditions for those coming behind her.

"Some of the little kids want their first job to be McDonald's. Why should they start at a minimum wage of what I started with and not at a fair wage?!."

The fast food giant announced last week that it would raise entry level pay to a minimum of $11 an hour at company-owned stores, based on location, and said it intends to pay an average of $15 an hour by 2024.

"McDonald’s is lucky to have the hardest working and most dedicated restaurant crew in the industry, who have tirelessly served our communities during this challenging year. That’s why McDonald’s is raising hourly wages for more than 36,500 employees at McDonald’s-owned restaurants by an average of 10 percent. These raises build on competitive benefits package offered to eligible employees in McDonald’s-owned restaurants, including paid time off, access to education, employee assistance, a 401K plan and other rewards programs."

McDonald's revealed it made $5 billion in profits in 2020 and paid $4 billion in dividends to shareholders.