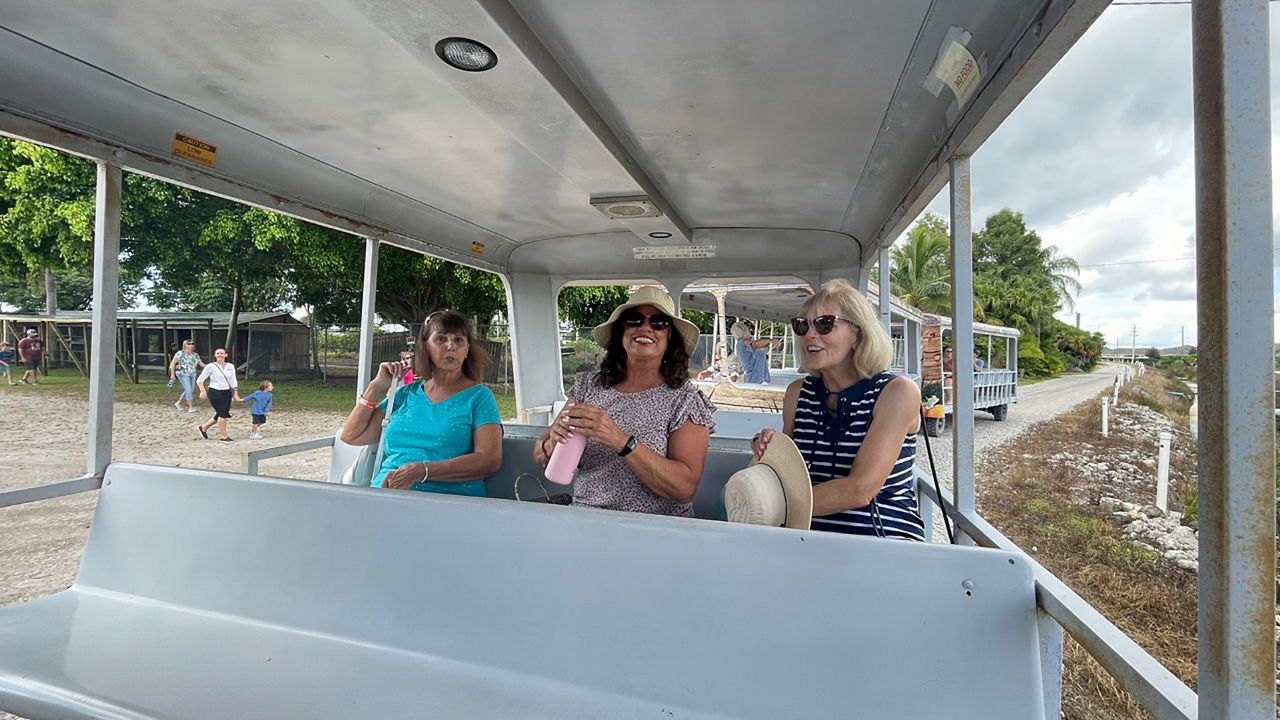 Mixon Fruit Farm has trams rides and sets out on the dirt paths through their abundant orchards and groves. (Spectrum News/Caitlin Wilson)

Florida on a Tankful: Tram tours return to Mixon Fruit Farm in time for fall

BRADENTON, Fla. — Fall is officially here and so are the fall activities. In one of this week's Florida on a Tankful, we headed to a classic fruit and citrus farm where they're welcoming back their festive tram tours.

“Alright! all aboard!" Rick Gretak yelled to a bustling group outside Mixon Fruit Farm's main store.

Each morning, Greytak fires up Mixon Fruit Farm's trams and sets out on the dirt paths through their abundant orchards and groves.

“This bamboo takes quite a bit of water to grow early on!" Greytak said as he drove through their new bamboo fields.

Greytak stops off at different spots along the way to get a look into the history of the farm. It is a family-run operation that started more than 80 years ago as a small citrus farm has now blossomed into an operation that ships around the country.

“when we pick that fruit we know it's gonna be eaten right away," Greytak said as he showed off some of the fruit grown on the farm.

Beyond the tram rides, guests can get off the tram and see what else is created at Mixon Fruit Farm.

“It feels cold ... very smooth skin though considering it looks rough," one guest said as she held one of their alligators at their rescue center.

Here they are host to a number of rescued and rehabilitated animals partnering with a Florida wildlife rescue, Wildlife Inc., to help educate the public and promote conservation.

"You can touch her just be careful of her head she gets a little scared sometimes," animal caretaker Damon Hurd said as he showed the group another one of their female alligators.

The tram tours run for about an hour with the stop at the animal center. Once back to the main store you can grab lunch at their restaurant and check out all of the samples. They allow you to try a number of their fresh juices and homemade fudge made on the premise.

It's a day spent getting a look at a mom-and-pop citrus farm with a host of colorful characters that make Mixon Fruit Farm a one-of-a-kind destination.

Trams run Tuesday through Saturday and leave twice a day at 11 a.m. and 1 p.m.