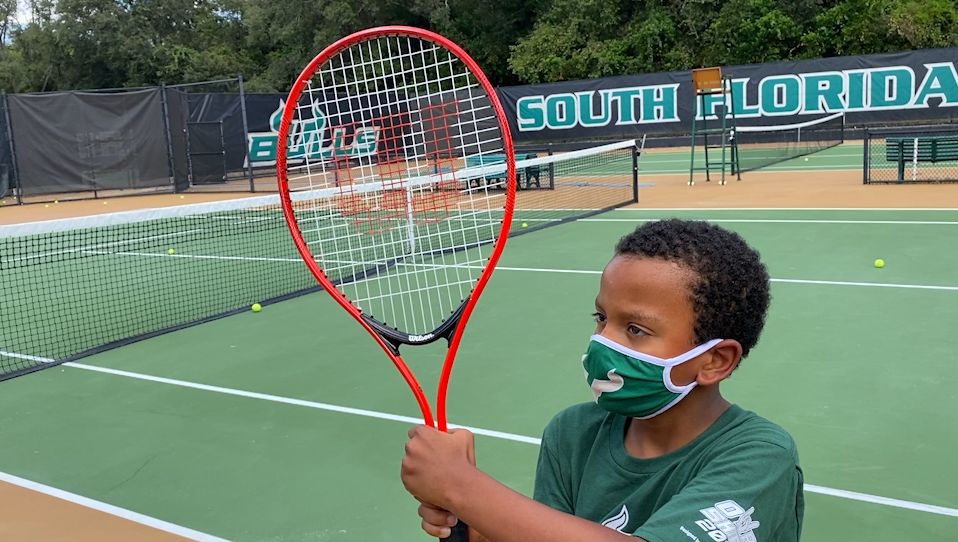 He’s a hard one to keep up with. That’s because Declan Patrick is a little all over the place, just like his tennis game.

This seven year old isn’t the next Roger Federer. He doesn’t really know how to serve. Or even hit the ball properly. But there’s just something about Declan that brings a winning edge to USF.

“His presence is special,” USF sophomore Bruno Oliveira said. “His energy is special as well. And it makes us feel special.”

Special only begins to describe Declan. He’s a bundle of energy that if you could bottle it up and sell it, you’d make millions. And he loves tennis.

You wouldn’t know it by looking at him, but Declan’s not right. On the outside, he looks like your normal seven year old. But on the inside, he’s got a lot going on. Declan suffers from Mitochondrial Disease, a disorder that affects the way he produces energy for his body to function properly.

“I have to watch him suffer through all the stuff of being in the hospital, just suffering so much when he is ill and when he’s in a hospital stay,” Declan’s mother Kathy said. “When he comes here, he forgets all about that. It just all goes away.”

At USF, Declan gets to be just a kid. Not someone who has to take 15 medications a day. Or someone with a feeding tube attached to his stomach. Thanks to the Team Impact organization that pairs a chronically or terminally ill child with a sports team, Declan is a USF Bull.

And he’s learning more than just tennis. He’s learning what it takes to be a Bull, a lesson all USF student-athletes learn.

This is more than a bonding experience. This is a life lesson in real time because Declan’s taking them all on his journey.

“Great camaraderie with the team, new friendships,” Kathy Patrick said. “To bring joy to their faces and show them what a fight is really about.”

That’s what this partnership does. Both sides get something out of it. The USF team gets a greater perspective on life and the sport they love to play. And Declan, gets to be just Declan, that bundle of energy that is teaching his new Bulls teammates more than they are teaching him.

“Declan is an everyday reminder of that,” Fisher said. “He fights through adversity. And things that everybody takes for granted, Declan, its a challenge for him. He does it with passion and grace and he’s an inspiration for all of us.”