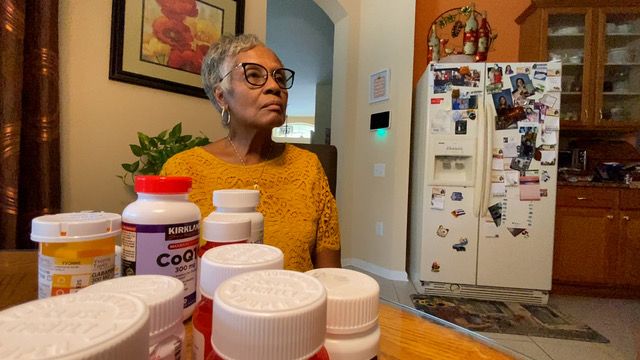 We caught up with 72-year-old Yvonne Taylor at her Wesley Chapel home, as she headed to her neighborhood pharmacy. (Cait McVey/Spectrum Bay News 9)

As we await a vote in the House on the Build Back Better Act, Spectrum News took a closer look at who is affected by a key measure put back in the legislation during negotiations this week: the effort to lower prescription drug prices for seniors.


We caught up with 72-year-old Yvonne Taylor at her Wesley Chapel home, as she headed to her neighborhood pharmacy.  It’s a trip she says she makes more than she would like, to pick up prescriptions to treat her rheumatoid arthritis.

Some of her medications are significantly more than others, costing hundreds if not tens of thousands of dollars a year.  Taylor’s insurance and Medicare coverage pay for most of it, but she says her copay is still significant.

“It costs out of pocket $174,” she says about one of the drugs she takes regularly.

Rheumatoid arthritis treatments are among the most expensive drug costs seniors face today, along with cancer treatments. A plan to bring those prices down made its way back into the social safety net legislation this week, after a brief removal during negotiations.

Yvonne Taylor is one of many seniors with mounting prescription costs. The 72-year-old retiree tells us she continues to dip into her savings to pay for her rheumatoid arthritis meds. Yvonne says future looks bleak without relief through the #BuildBackBetterAct @BN9 pic.twitter.com/jjfPipfzC3

Florida AARP Director Jeff Johnson says this is something the organization has been pushing for - the ability for Medicare to negotiate drug prices and a cap on how much seniors pay out of pocket each year.

“The fact that this fell out of the plan a week ago and is back in is solely a testament to the fact that the people who are directly affected have raised their voices,” Johnson said.  “They’ve called, they’ve emailed and they’ve done everything they can to reach their member of Congress to say above all else this needs to be included because they’re desperate.”

It’s a feeling Taylor knows all too well, along with the pain that now accompanies what she once considered simple chores like cleaning.

“It’s getting harder for me,” Taylor said.  “The bending, my knees, my legs, they’re very stiff.”

Like many retirees, the 72-year-old is on a fixed income and has been dipping into her savings to cover medication costs, all in an effort to keep a crippling disease at bay. Like others in the same position, Taylor says she doesn’t know how much longer she can do it if relief from the government doesn’t come through.

“Everything is becoming so expensive,” Taylor said.  “I just don’t know what I would do.”