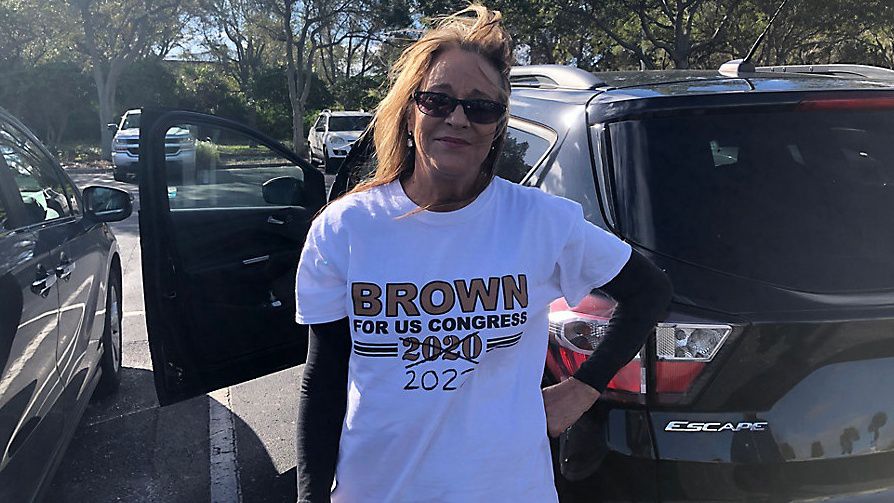 Cathi Chamberlain is among the 70% of Republicans who dispute the results of the 2020 presidential election (Photo by Mitch Perry/Spectrum Bay News 9).

CLEARWATER, Fla. — Both conservative and progressive groups will hold events this Thursday in the Bay area to mark the first anniversary of the attack on the U.S. Capitol that took place on Jan. 6, 2021.

In what is being promoted as a “One Year Rally for Our Political Prisoners,” state Rep. Anthony Sabatini and a host of GOP congressional candidates such as Christine Quinn, Martin Hyde and Brian Perras will gather in front of the Pinellas County Jail in Clearwater to speak out against the continued incarceration of Jeremy Brown, who was arrested on Sept. 30 for his alleged role in the attack on the U.S. Capitol.

Brown, a former U.S. Army special forces soldier, was officially charged with knowingly entering a restricted building or grounds without lawful authority. He’s also facing federal firearm charges. But the reason he is being held without bond in the Pinellas County jail is that a federal judge says that he made a specific threat to law enforcement when they searched his Palm River area home.

“He’s now sitting in a Pinellas County jail for over 100 days. It’s ridiculous. He didn’t even go into the Capitol, as so many of these folks are being targeted just to set an example,” says conservative activist Cathi Chamberlain, one of the organizers for the event taking place in Clearwater on Thursday.

Brown was deployed twice to Afghanistan and twice to Iraq during his military career. He filed to run for Congress against Democrat Kathy Castor in Hillsborough County in 2020 but withdrew before the August primary. Prosecutors have said that Brown is a self-identified member of the Oath Keepers extremist group.  Brown has said that he was approached by the FBI in December 2020 and asked to infiltrate the Oath Keepers.

There have been others in the Bay area who have already been punished for their actions on January 6th, such as Robert Scott Palmer from Largo. Palmer admitted to assaulting officers with a wooden plank and a fire extinguisher and was sentenced last month to 63 months in prison, the harshest sentence imposed to date of any Jan 6th protestor.

Chamberlain traveled with a group of Donald Trump supporters to see the former president speak at the Ellipse in Washington on Jan. 6. She did not attempt to enter the Capitol.

“The first sign that I saw was a guy running back past me from the Capitol steps and his eyes were all watery from flashbangs that we’re going off and tear gas that was being sprayed into the crowd. So that was really alarming to see and very unexpected,” she told Spectrum Bay News 9 on Monday. “And of course, at that time that’s when myself and the group that I was with turned around and started heading back.”

Chamberlain, the author of the book Rules for Deplorables, says that she wants to get to the bottom of who was responsible for the attack on the Capitol, but is unimpressed by the special committee in the House of Representatives that is investigating the riot. She faults the Democrats for failing to include Republicans like Ohio’s Jim Jordan to the committee and instead has allowed “RINOs”  ("Republicans In Name Only") like Liz Cheney and Adam Kinzinger to serve.

A new POLITICO/Morning Consult survey finds Republicans to be split on the committee – with 40 percent approving of it, and 44 percent disapproving.

However, new polls also continue to show that the majority of Republicans don’t believe that Joe Biden was fairly elected president in 2020. A University of Massachusetts survey released last week shows that 71 percent of Republicans – and one-third of the nation – continue to believe that Biden’s victory was illegitimate, and that Republicans continue to blame Democrats, Antifa and the Capitol Police for the events of Jan. 6.

Chamberlain says it’s impossible to think about the 2022 election before fully addressing the 2020 contest and believes that audits are needed throughout the country to fully vet the election results.

And she doesn’t believe that Trump supporters were the main instigators of the attack on the Capitol.

“I witnessed a lot of people overexcited,” she recounts about what she saw that day in Washington. “And there were so many people that were oddly just waving them in and breaking the windows. And we’ve seen the video evidence of patriots trying to stop those people from breaking windows and doing destruction.”

In addition to the event to be held in front of the Pinellas County Jail on Thursday, there will be “vigil for democracy” rallies hosted by progressive groups taking place in both Tampa and St. Petersburg on Thursday evening as well. The Tampa event will take place in front of the Federal Building (801 N. Florida Ave), while the St. Petersburg event will take place in South Straub Park (Beach Drive NE and 2ndAvenue NE). Both events are scheduled to begin at 5:30 p.m.