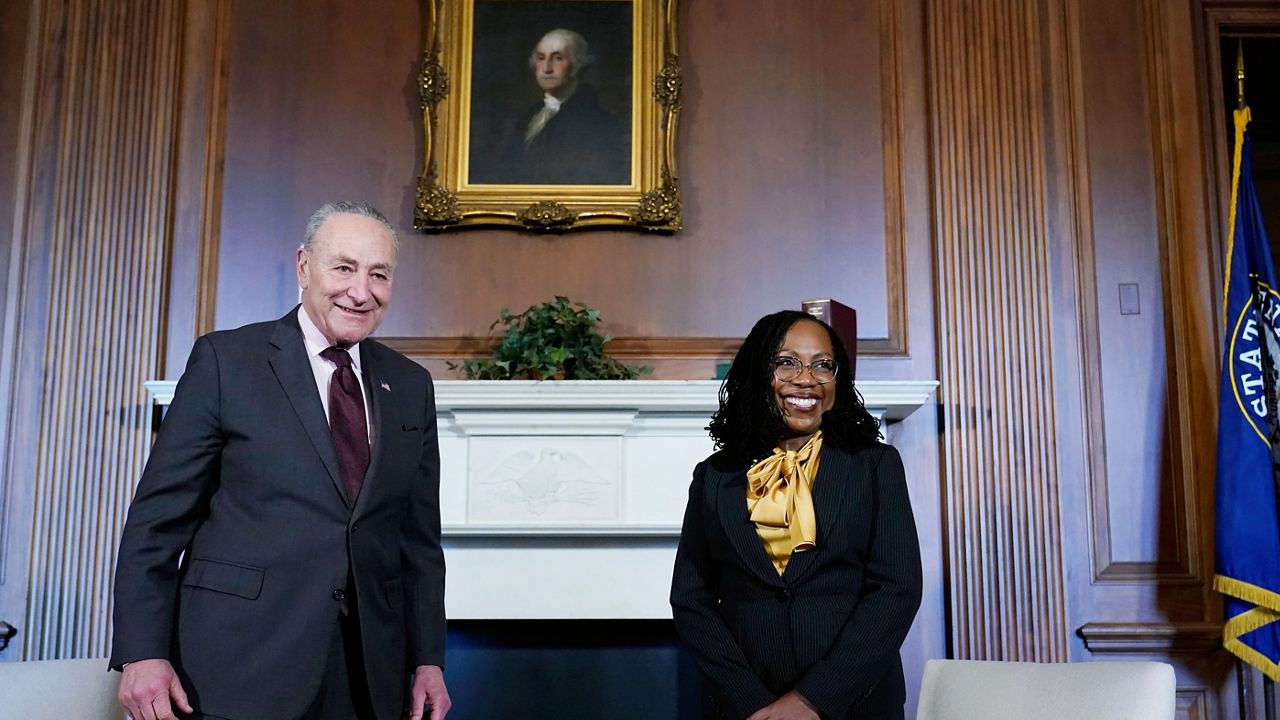 Supreme Court nominee Ketanji Brown Jackson is meeting with congressional leaders Wednesday, taking her first steps toward confirmation as senators and the White House push for a swift timeline.

Jackson was also set to visit with the chairman of the Senate Judiciary Committee, Sen. Dick Durbin, D-Ill., and the committee’s top Republican, Sen. Chuck Grassley of Iowa.

Later Wednesday, Durbin announced that Judge Jackson's confirmation hearings will begin on March 21 and will conclude on March 24.

“As I have said from the time that Justice Breyer announced his retirement, the Committee will undertake a fair and timely process to consider Judge Jackson’s nomination,” Durbin wrote. “I look forward to Judge Jackson’s appearance before the Committee and to respectful and dignified hearings.”

As Schumer and Jackson sat down in the Capitol to talk, he told reporters that he was "just so pleased" that President Joe Biden chose a nominee “with such amazing qualifications and breadth of experience.”

"I am just so pleased that the president has nominated someone of such amazing qualification and breadth of experience."@NY1 @CapitalTonight pic.twitter.com/0hXDndeLF2

“She belongs on the court," Schumer said. "She reminds me in certain ways of Justice Breyer," calling her "thoughtful and evenhanded."

I’m honored to meet today in the Senate with Judge Ketanji Brown Jackson for the first time since her nomination by President Biden to the U.S. Supreme Court.

She is brilliant, beloved, and belongs on the Court! pic.twitter.com/s62pqyeZ0X

Jackson, a federal appeals court judge, will make the customary rounds of Senate visits in the coming days as the committee prepares for hearings expected in mid-March. Democrats are hoping they can vote on her confirmation to replace retiring Justice Stephen Breyer by mid-April.

If confirmed, Jackson would be the first Black woman to serve as a justice in the court’s 200-plus year history. Breyer has said he won’t leave the bench until this summer, when the court’s session is over, but Democrats are taking no chances in case there is any shift in a 50-50 Senate where Vice President Kamala Harris provides the deciding vote.

Biden cited Jackson’s nomination and honored Breyer in his State of the Union speech on Tuesday evening.

“One of our nation’s top legal minds, who will continue Justice Breyer’s legacy of excellence,” he said of Jackson.

Jackson, 51, was confirmed last year as an appeals court judge in Washington after eight years on the district court. She once worked as one of Breyer’s law clerks and served on the U.S. Sentencing Commission, the agency that develops federal sentencing policy.

Biden said she was a “consensus builder,” noting her work as a private litigator and as a federal public defender, and that she comes from a family of public school educators and police officers.

In a 149-page questionnaire Jackson returned to the Senate committee this week, she disclosed that she was first contacted by the White House Jan. 30, three days after Breyer announced his retirement. Jackson, a judge on the U.S. Court of Appeals for the District of Columbia Circuit, had long been seen as Biden’s top candidate for the job, which he had promised would go to a Black woman.

Jackson met with Harris in a video call on Feb. 11 and then interviewed with Biden at the White House on Feb. 14, she says in the questionnaire. Biden called and offered her the nomination on Feb. 24, a day before he made his decision public.

The questionnaire provides the committee with a record of every job she has held and the decisions she has made in her nine years as a federal judge, as well as any recusals and potential conflicts of interest. Senators and staff will be able to vet that information much more quickly than they would have for other candidates since they just considered her last year for her current position.

Jackson’s list of her most significant cases contains only one new entry from the appeals court, describing an opinion she wrote for a unanimous three-judge panel that came out in favor of labor unions.

Durbin said Monday he’s still hoping to win some GOP votes for her confirmation, even though many Republicans have expressed skepticism that Jackson is too liberal. Sens. Susan Collins of Maine, Lisa Murkowski of Alaska and Lindsey Graham of South Carolina were the only Republicans who voted to confirm Jackson to the appeals court last year.

While Collins has appeared open to voting for Jackson again, Murkowski said in a statement last week that her previous vote did not mean she would necessarily be supportive this time.

"I’ve been clear that previously voting to confirm an individual to a lower court does not signal how I will vote for a Supreme Court justice," she said. "I am committed to doing my due diligence before making a final decision on this nominee. Being confirmed to the Supreme Court—the nation’s highest tribunal, and a lifetime appointment—is an incredibly high bar to achieve.”

"I look forward to the opportunity to meet with Judge Jackson to learn more about her qualifications as a jurist, her judicial temperament and philosophy, and discuss issues important to Alaskans," Murkowski wrote.

Graham had pushed for a different candidate from his home state, federal Judge J. Michelle Childs, and expressed disappointment that she was not Biden’s pick, alleging in a statement that his nomination of Jackson meant "the radical Left has won President Biden over yet again."