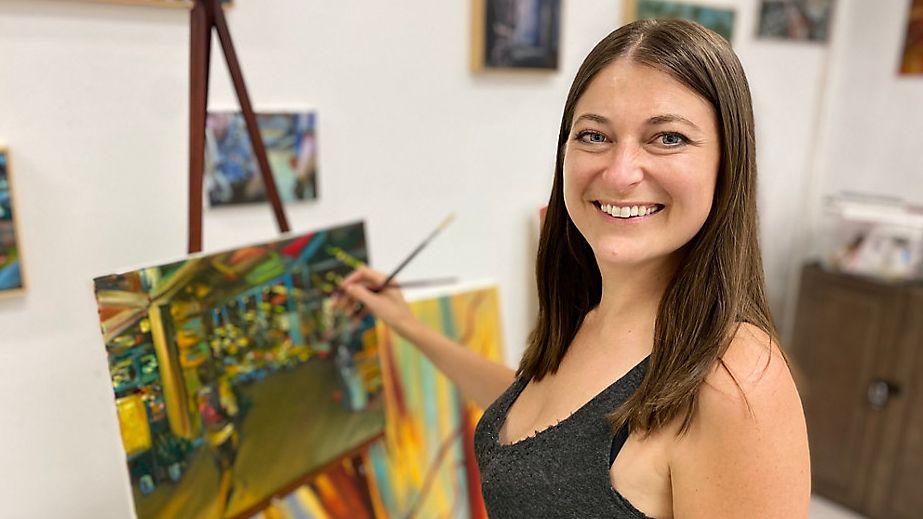 ST. PETERSBURG, Fla. — It’s no secret that finding affordable property across the Tampa Bay area is becoming more and more of a problem for people buying and renting homes.


For local artists, finding studio space for a good price has also become a huge undertaking.

However, there is a new option for artists who are looking for blank walls and a little collaboration

Spectrum News caught up with artist Brittany Worlinsky as she was putting on the final touches to an oil painting she’s been working on inside the new space.

“I kind of wanted to be a part of a group, so that’s what drew me to this space specifically,” she said.

For the past month Brittany has been spending her time inside Zero Empty Spaces.

It’s a management company that finds vacant spaces and turns them into mini studios.

Brittany can work as she pleases, she can host classes, and she isn't paying double rent for a studio.

“Yeah, I don’t think that would be a possibility right now," she said. "That would be insane."

Instead she pays $400 a month for her spaces.

According to a recent inflation survey from the University of South Florida, about 24% of Floridians have a hard time keeping up with their rent and mortgage.

In that same study, 87% of Floridians say that supply chain issues were the biggest factor impacting inflation right now.

“The canvas typically, though the prices haven’t necessarily changed too much, they have all been on backorder, especially the more popular sizes," Brittany said. "Sometimes it’s a little bit more challenging to find specific paint colors."

While the current market isn’t an easy place for artists, Brittany looks forward to the time she’ll spend inside Zero Empty Spaces.

“Artists kind of lift each other up, so if that’s what you’re looking for, I’d say it’s a good idea to become part of the space,” she said.

Zero Empty Spaces just opened up at the beginning of April inside Tyrone Square Mall.

All spaces are $2.50 per square foot, with utilities included.

Right now they are accepting new artists into the space.