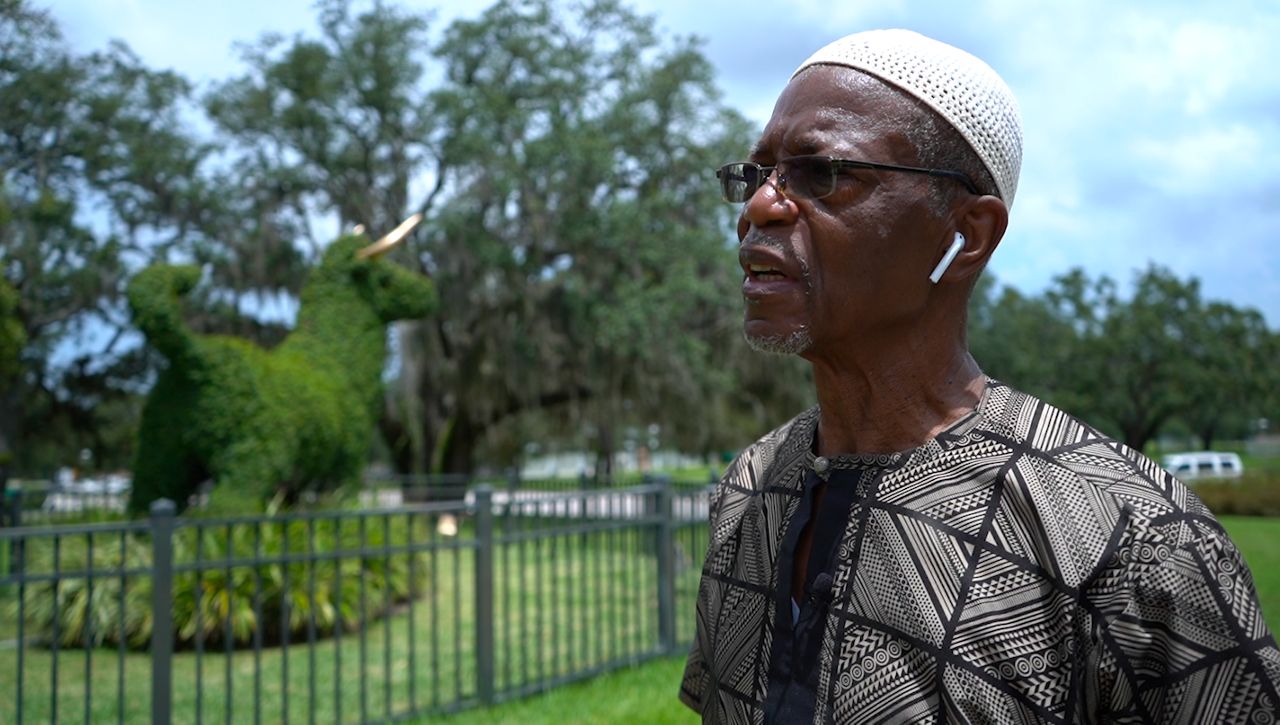 Askia Muhammad Aquil on USF's campus for the first time in decades. At 75, he's graduating after dropping out of college 52 years ago. (Saundra Weathers, Spectrum News staff)

He gave up academics for activism 52 years ago, now he's graduating

TAMPA, Fla. — A local civil rights activist who faced incarceration, violence and opposition, fighting for the rights of others, is now celebrating a huge milestone he wasn’t sure he would get to.

Askia Muhammad Aquil gave up his dream of graduating college to advocate and rally after the death of Dr. Martin Luther King Jr.

Now, the 75-year-old is making his dream deferred into a reality.

When Dr. King died, Aquil was a 21-year-old USF college student. Once he started to use his voice as an activist, he said he became a target.

“I was spending more time in and out of police cars and jails and courtrooms than I was in classrooms,” he said.

Back then, he didn’t know he would end up choosing activism over academics.

“After Dr. King was killed I became more of a full-time activist than a full-time student, and at a certain point I realized that I was actually committing academic suicide by enrolling in class and then not showing up,” he said.

He also didn’t know he would end up right back where he started. He enrolled in college again this semester after dropping out 52 years ago.

“I’m both excited and relieved. It’s been a long journey, and it’s good to see myself crossing the finish line for this episode because I do intend to continue on,” he said.

When he walks on campus 52 years later, he can’t help but notice all of the changes over the years behind the scenes and in front.

“When I came here, there was not a single Black professor on this campus. Not a single one. So that’s one of the things we demanded was they do some hiring and recruiting,” he said. The university was approaching 10,000 students and I think they were a little under 10,000, and I think you can count the number of Black students on maybe three hands.”

That was part of his work then to change those numbers.

“We were effective. We made a change,” he said. There’s living proof that we made a difference on this campus, and it’s gratifying to know that and to come full circle.”

Surprisingly, he was able to use his college credits from the 1960s.

“I still have my transcript. They looked over my transcript. At first they said, 'Looks like you need 16 hours,'” he said. “I had enough credit hours built up again between my AA degree and the time that I spent here, that when I re-enrolled I only needed 5.3-5.6 hours. Listen, they said, 'Take two three-hour courses and you’ll be finished.' That’s what I’ve done.”

That’s what brings everything full circle for him, and he doesn’t plan on stopping. Next year, he’s pursuing his master’s degree.

“Obviously it was not my original plan,” he said. “There are things I’ve experienced, places I’ve been, people I’ve met, things I’ve accomplished that I never would’ve conceived.”

It’s something he said is as vivid in his mind as the day Dr. King died.

It was news the 21-year-old college student didn’t want to believe was true.

He explained that it didn’t take long for the community to rally.

“On April 9, they held a campus wide and community memorial service for Dr. King, and I was asked to be one of two main speakers,” he said.

Fifty-two years later, Aquil still has a copy of that speech and the program for the event that drew a crowd on the campus of USF in 1968. It’s a speech he said he pulled an all-nighter to write.

“I stayed up until 2 o’clock in the morning writing that. Because we had to type. You type on a typewriter, and so I had to type and retype and type, but I wanted to say something that I thought would be meaningful and sincere,” he said.

The speech reads in part, “Dr. King was a man of peace and good will. He was a symbol of hope for a better America and a better world. We are sickened by the tragedy.” The speech goes on to call out leaders and challenge the current state of affairs. “As citizens of this country we hereby refuse to passably to accept the sicknesses that abound an American society. We will live in peace and harmony in our lifetime. Even if it means giving up friends, relatives and national traditions that America purports to represent.”

Aquil ended the speech with, “This is our memorial to Dr. King. One that we started while we yet lived and one that lives on beyond his death.”

Aquil is a bit of a historian and record keeper. His big binders kind of resemble those huge family photo albums. They’re filled with pictures, newspaper clippings and anything that serves as a reminder of the times in the 1960s, 70s and 80s.

Now, he will have a new reminder in the form of a college degree.

“If you could have a do over, there are always some things you can do over," he said. "But I don’t regret what’s happened in my life at all."