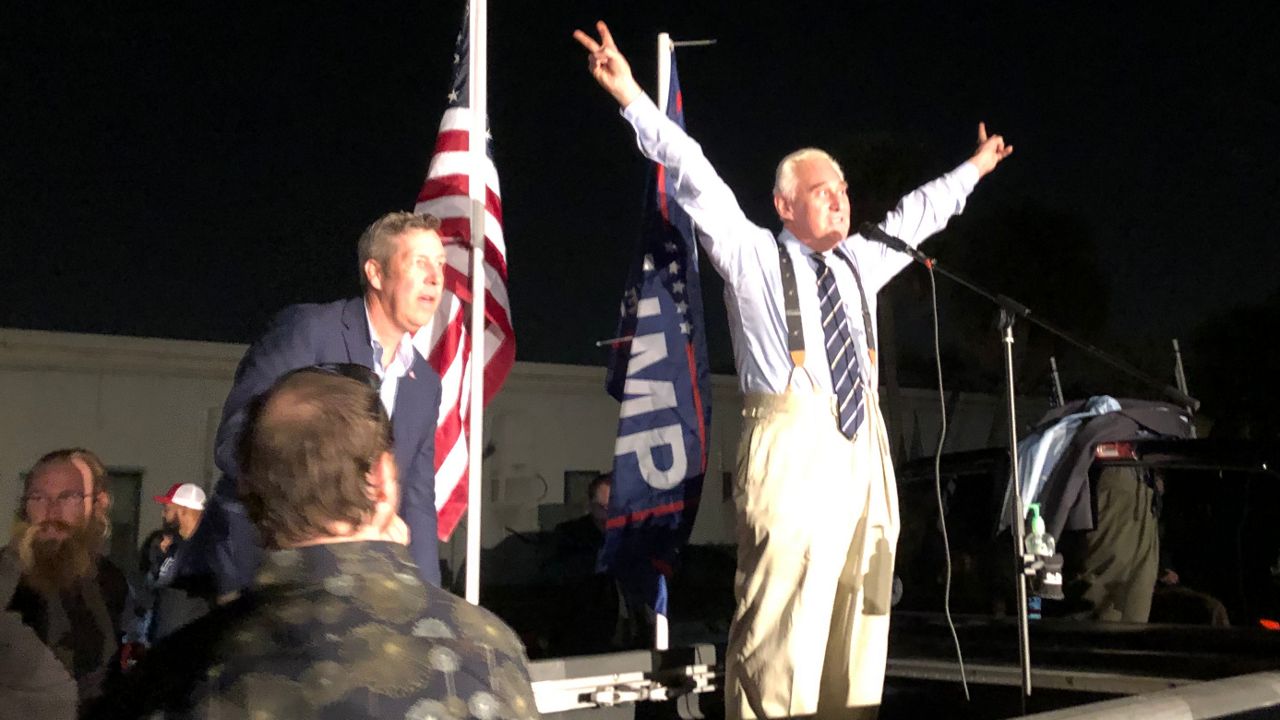 With President-elect Joe Biden’s Electoral College victory certified on Monday, there is just one venue left to challenge the results of the 2020 election – that’s when Congress convenes on January 6 to approve the electoral results from all 50 states. It requires just one member of the House and a member of the Senate to submit an objection in writing to a state’s results.

Speaking before a crowd of several hundred people in Largo on Monday, Roger Stone encouraged the audience to contact Florida Senator Rick Scott to be that one member of the Senate.

“I believe that there is a courageous member of the House who is going to rise to the certification,” Stone said while standing atop of the back of a flatbed truck in the parking lot of Conservative Grounds, the pro-Donald Trump coffee shop in Largo. “And then it is up to the Republican Senators.”

“I look to the men that I admire in the Senate,” Stone continued. “Senator Rand Paul. Senator Ted Cruz. Senator Josh Hawley. Senator Rick Scott. Anyone of these senators could second the motion by a House member to trigger a re-examination of the corruption in this election.” (Senator Scott’s office did not immediately respond for a request for comment).

Several news organizations reported on Tuesday that Senate Majority Leader Mitch McConell “pleaded” with Senate colleagues not to join any House members in objecting to the Electoral College results.

While the sentiment expressed by those in Largo may be out of the mainstream, they’re not with Republicans. A poll conducted last week by NPR/PBS/Marist College found that while a solid majority of Americans do trust the results of the presidential election, less than a quarter (24%) of Republicans say they accept them.

Stone, 68, is a longtime GOP political consultant who has worked with Republicans since the 1970s starting with Richard Nixon. He’s also been a friend of Trump’s for over 40 years, and said he first began talking to Trump about running for president in 1987.

Stone was arrested on a seven-count indictment in connection with former special counsel Robert Mueller’s investigation into possible collusion between the Trump campaign and Russia back in November 2019. In February he was sentenced to 40 months in prison, but his sentence was commuted by Trump back in July, making him a free man.

Stone spent more than of his 40-minute speech referring to his arrest and prosecution, insisting that he was always innocent of charges that he worked with Julian Assange and WikiLeaks in the hacking of Democratic National Committee servers.

Buzzfeed reported last month that newly released reports of the Mueller report revealed that prosecutors worried that they did not have enough hard evidence to prove that Assange nor Stone actively participated in the hacks.

“They performed a proctological examination on me, looking at every aspect of my life,” he said about the original charges filed against him. “My family life. My business life. My political life. My social life. And they found nothing. Nothing. Because Roger Stone did nothing wrong.”

He described his court trial as “a Soviet style show trial” and blasted the federal judge in his case for putting a media gag order on him for 16 months. As someone who makes his living writing and speaking, Stone said that gag order ultimately cost him his home, his financial savings and the “small college fund” that he had reserved for his five grandchildren.

California Rep. Adam Schiff, chairman of the House Intelligence Committee, tweeted that it was “a terrible blow to justice and the rule of law.”

Preceding Stone on Monday night were four other speakers, all of whom bashed the results of the presidential election.

“Trump has not conceded and we should not concede either,” said Craig Long. “Can I get an amen to that?”