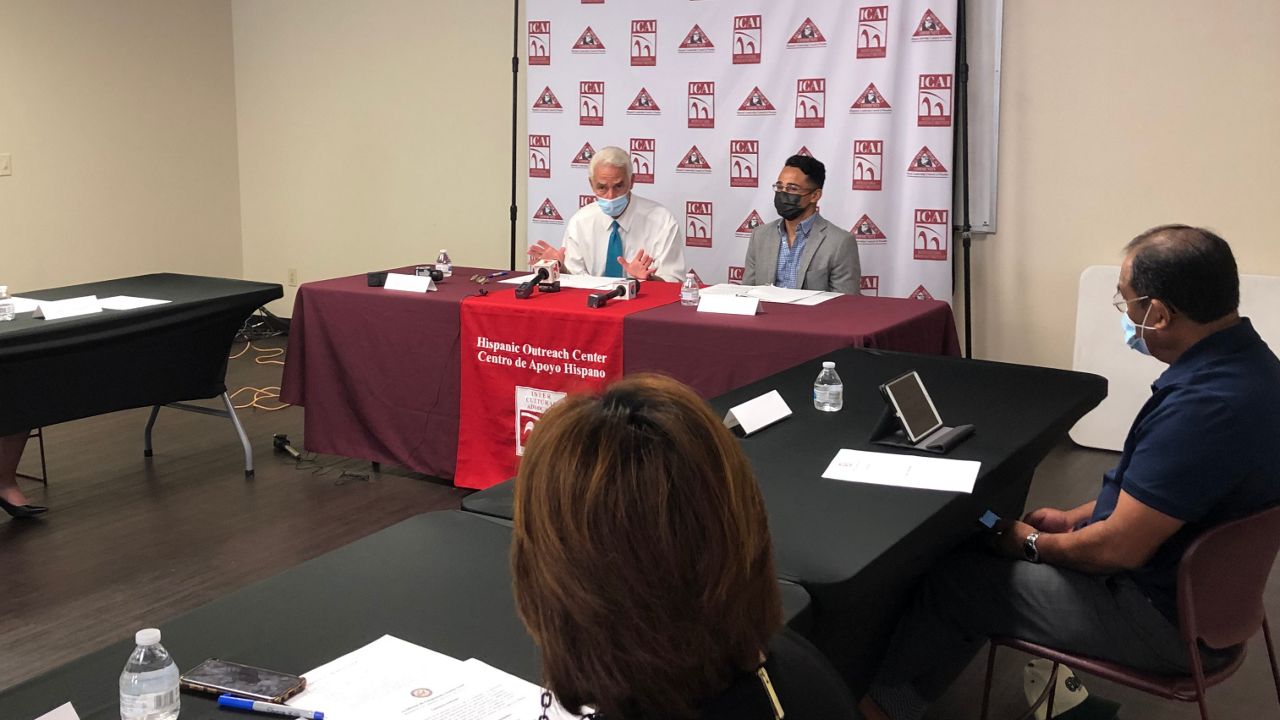 Charlie Crist was one of the first Democrats in Florida to ask that federal authorities investigate DeSantis last month for alleged favoritism in distributing the COVID-19 vaccines. (Mitch Perry/Spectrum Bay News 9)

Charlie Crist has not officially announced his candidacy for the Democratic nomination for governor yet, but the Pinellas County Congressman increasingly sounds like a candidate as he continues to hammer Governor Ron DeSantis for his handling of the distribution of Covid-19 vaccines in the Sunshine State.

“And the fact that it’s happening in Florida and that our governor is going to Lakewood Ranch. And going to the Villages. And …what are generally white Republican and wealthier communities,” Crist added after hosting a roundtable discussion at the Hispanic Outreach Center in Clearwater.

Crist was one of the first Democrats in Florida to ask that federal authorities investigate DeSantis last month for alleged favoritism in distributing the Covid-19 vaccines. Last week, two other Democrats – Agriculture Commissioner Nikki Fried and Senate Minority Leader Gary Farmer, issued separate statements calling on the FBI and Dept. of Justice to investigate whether political campaign contributions made to the governor’s political committee were linked to certain communities getting favorable treatment with vaccine distributions.

The governor’s office did not immediately respond for a request for comment today, but spokesperson Meredith Beatrice told CNN last week in part that “the insinuation that politics play into vaccine distribution in Florida is baseless and ridiculous.”

While people of color are receiving Covid-19 vaccinations at a much lower rate than their white peers nationally, some analysts say that skepticism is a factor in some of those numbers.

In a UNIDOS US Latino Survey on Health Priorities from October, 28% of Latinos reported that they were unlikely to get vaccinated for COVID when it became available.

Vicky Obando with the Hispanic Outreach Center says that there is definitely some skepticism in the Latino community when it comes to getting the vaccine, which she attributes to misinformation. “I think that information that comes from out of the country and inside of the country - social media, Facebook, WhatsApp, Instagram. They publish information that is wrong in my belief.”

Obando says her organization provides a number of services for the community in Clearwater: Food stamps. Medicaid services. Youth leadership. Immigration. But they are not a health care center.

“We need the community centers to start working and promoting the vaccine,” she says, adding that many of the center’s members don’t have health insurance, so they don’t have their own physician recommending that they get the vaccine.

Crist spent about an hour listening via a translator to the concerns of the 10 or so people who gathered at the Clearwater roundtable discussion.

Largo resident Maria Flores said that she lost her job a year ago right after the pandemic closed down the school system. She says that she didn’t have anyone available to take care of her three kids at home after her employer gave her an ultimatum.

She said that she was grateful for the help from the Hispanic Outreach Center when it came to training her on using computers as her kids began virtual learning.

Crist’s other main message on Friday was to tout President Joe Biden’s signing the American Rescue Plan, the massive $1.9 trillion-dollar spending plan that’s most immediate tangible effect on the majority of Americans will be $1,400 stimulus checks which are already being mailed out.

“It’s muy importante,” Crist said in Spanish to the gathering. In speaking with reporters afterwards, he referred to how it could help Americans still in desperate economic need.

“It will help with your mortgage. Help with your rent. Help with getting food on the table,” he said, adding that “this is a compassionate, gracious American loving piece of legislation.”

Needless to say, Republicans don’t agree. They say that it’s a massive overreach for what is required at the moment. The bill was passed on a straight party-line vote in both the House of Representatives and the U.S. Senate.

Crist said that Pinellas County will receive $314 million from the legislation.