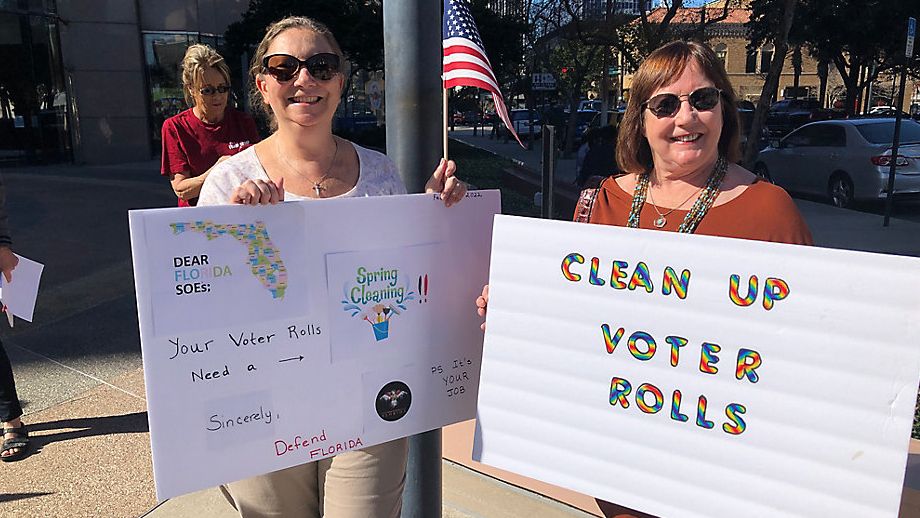 Despite smoothness of 2020 election, some Florida lawmakers continue to push election integrity legislation

Though there has been no evidence of substantial voter fraud in the 2020 presidential contest, Republican lawmakers in Florida are again pushing measures that would address that issue in the current legislative session.

A state Senate committee on Tuesday advanced a proposal (SB 524) that would pay for a new office that would investigate election crimes. The measure also includes provisions that would require voters to include parts of their driver’s license or Social Security numbers when they submit their vote-by-mail ballot, which would include an additional envelope.

“Requiring voters to cure their vote-by-mail ballot if the ID number is missing potentially is a recipe for disaster,” Lake County Supervisor of Elections Alan Hays told the Senate Committee on Ethics and Elections.

Wesley Wilcox, Marion County Supervisor of Elections, said that adding an additional envelope to the process would be “problematic” and “place some challenges for our offices.”

The introduction of the measure comes in the same week that a host of civil rights groups went to federal court to challenge the state’s 2021 restrictive voting law (SB 90). The Florida NAACP, the League of Women Voters and other groups claim that there are provisions in the new law that will primarily hurt minority voters and suppress voter turnout.

All of this action is taking place even after Gov. Ron DeSantis declared immediately after the Nov. 2020 election that Florida was the envy of the nation for having run such a smooth election. But that was before a host of other Republican controlled states where Donald Trump lost began challenging the election results.

Meanwhile in Tampa, Defend Florida, a group which says that part of its mission is to promote election integrity, held a news conference to discuss a report that they released today that alleges that they have found thousands of cases of voting irregularities in 34 Florida counties.

Volunteers from the group have spent the past eight months canvassing around the state asking voters specific questions – such as if they voted in the 2020 election and if so, by what method (they say that they never asked about who they voted for). They said that they used certified voting rolls obtained from the Secretary of State’s office to compare the responses from their canvas teams with the state’s data.

Defend Florida says that they gathered information on over 14,000 Florida voters and found 5,571 instances of voter or voting irregularities, including deceased voters and voters attesting to casting their vote in person, but a vote by mail ballot was recorded as their official vote.

Raj Doraisamy, a co-founder of Defend Florida, called on Florida Senate President Wilton Simpson to address the issues that the group found in its report. There were signs by members of the group at the press conference calling out both Simpson and House Speaker Chris Sprowls for not doing more on election security.

“When we first started this effort and first started talking to legislators, they were all saying, ‘Oh, we don’t want to deal with election integrity legislation in an election year,’” says Caroline Weatherington, the other co-founder of Defend Florida. “And that’s the wrong answer. You know you deal with it the year that you find out that there’s a problem.”

When asked her thoughts about SB 524, Weatherington said that the legislative proposal doesn’t address many of the issues that her group has uncovered.

Although Defend Florida is primarily made up of supporters of former President Donald Trump, Weatherington says her group isn’t partisan.

The Hillsborough County Republican Party called for an audit of the 2020 presidential election last October. Hillsborough County Supervisor of Elections Craig Latimer told Spectrum Bay News 9 at the time that in fact his office had already conducted one.

“We do an audit by law after every election,” he said. “It’s laid out in statute how we do it, and I’m satisfied that our results are accurate. Totally accurate.”

On a separate but related issue, Latimer issued a press release this week blasting a report from the Public Interest Legal Foundation that questioned whether his office acts on instances of potential voter fraud, saying that allegation “is completely false.”

In a report that was published last fall, the Public Interest Legal Foundation wrote that “election criminals in one of the largest cities in Florida have little to fear.” The report quoted Hillsborough County Deputy County Attorney Mary Helen Ferris as writing to the organization that they “had no responsive reports as we do not refer cases to the State Attorney’s Office.”

Latimer says that was an accurate remark, because the Public Interest Legal Foundation asked for records of referrals made to Hillsborough County State Attorney Andrew Warren, “of which there were none.”

He went on to say that the Public Interest Legal Foundation published their report “without context or explanation, and made no attempt to verify or clarify their false conclusions before publication.”

In response, a spokesperson for the group said that they were “floored” by Latimer’s statement that his office does not provide referrals directly to prosecutors.

“Assuming a misunderstanding on the part of county counsel when handling our request, we reached out multiple times via email and phone for clarification and never received a response,” said Lauren Bowman, a spokeswoman for the Public Interest Legal Foundation. “One particular email specifically asked if Hillsborough County submitted referrals to other offices. This affair is precisely why Florida needs to enact Gov. DeSantis' proposal to standardize reporting of election crime referrals as outlined in SB 524."

When asked about the legislative proposal which is being pushed by Gov. DeSantis, Warren calls it “a solution in search of a problem, and it’s a really expensive one at that.”