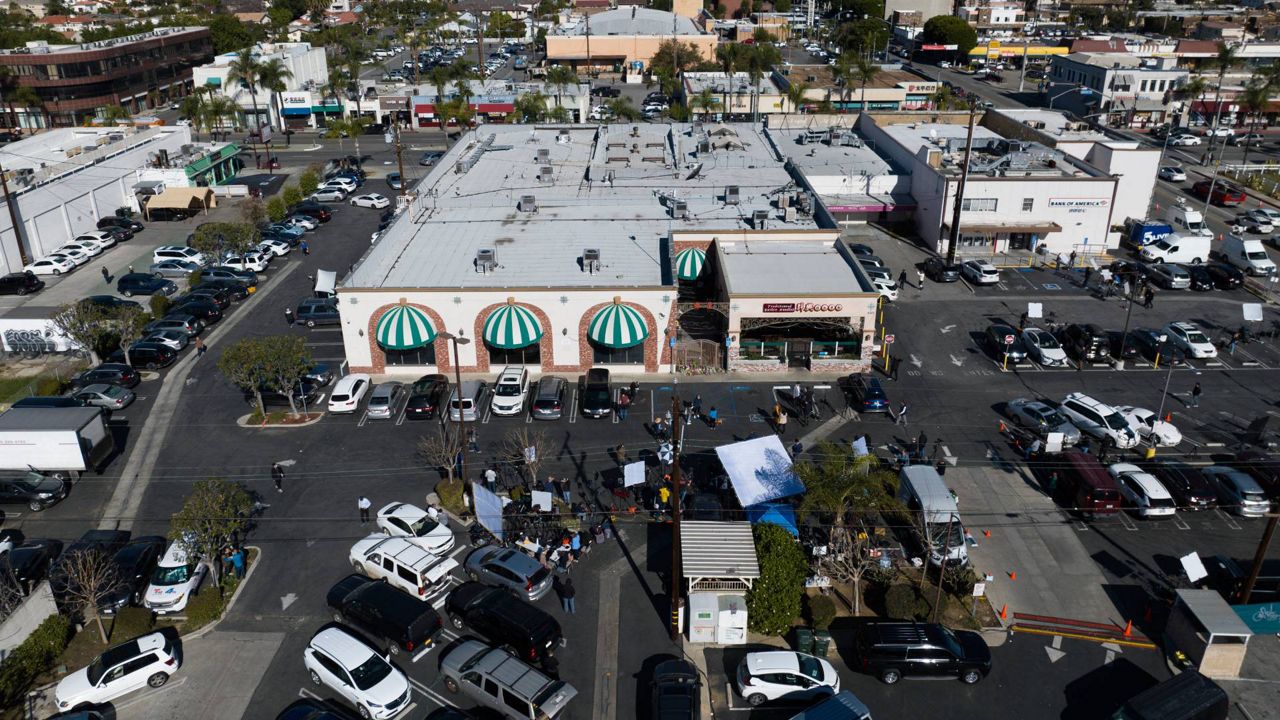 Members of the media are stationed in a parking lot outside Star Dance Studio Monday in Monterey Park, Calif. (AP Photo/Jae C. Hong)

MONTEREY PARK, Calif. (AP) — The 11 people killed in a dance hall shooting ranged in age from 57 to 76, the Los Angeles County coroner's office said Tuesday in releasing the names of the dead as investigators kept probing for a motive in the worst shooting in county history.


Sheriff Robert Luna called the suspect, 72-year-old Huu Can Tran, a “mad man” and said investigators were looking into whether he had relationships with the people who were shot at the Star Ballroom Dance Studio.

Tran fired 42 rounds from a semi-automatic weapon Saturday night, killing 11 people and wounding nine at the ballroom popular with older Asian Americans. He then drove to another nearby dance hall where an employee wrested a modified 9 mm submachine gun-style weapon away from him, Luna said.

Tran fatally shot himself Sunday as officers surrounded the van he was inside. A handgun was recovered from the van, which matched descriptions of the vehicle he used to get away from the dance studio.

The shooting was the nation’s fifth mass killing of the year and the deadliest attack since May 24, when 21 people were killed in an elementary school in Uvalde, Texas.

As Monterey Park residents and Asian Americans reeled from the violence Monday, a gunman in Northern California killed seven people at two farms. It marked the third mass shooting in California in eight days.

The names of the six women and five men killed in Monterey Park were released Tuesday. All but one were in their 60s and 70s.

Tran once frequented the ballroom and another dance hall he later targeted and griped about the way he thought people treated him there, a man who identified himself as a longtime friend told The Associated Press. Tran offered to teach new women at both clubs how to dance for free so that he would have a partner.

Tran was perpetually distrustful and paranoid and would regularly complain that people at the clubs didn’t like him, according to the former friend who requested anonymity to speak about Tran because he wanted to avoid the media spotlight.

“He always cast a dubious eye toward everything. He just didn’t trust people at all,” the friend said. “He always complained to me that the instructors ... kept distance from him, and according to what he said, many people spoke evil of him.”

Investigators were also looking into reports Tran made twice this month to police in the town where he lived that family members tried to poison him, defrauded him and stole from him a decade or two ago in the LA area, Hemet police spokesperson Alan Reyes told The Associated Press. Tran never returned with documentation he promised to provide.

“Our investigators will be looking at all those factors to see if it contributed to the madness that occurred,” Luna told reporters.

Sheriff’s deputies from Los Angeles County searched Tran’s home in a gated senior community in Hemet, a little over an hour’s drive from the site of the massacre.

Officers found a .308-caliber rifle, an unknown number of bullets and evidence he was making homemade firearm suppressors that muffle the sound of the weapons.

Tran lived in The Lakes at Hemet West, a gated community off a busy road with a view of snow-covered mountains. The development has a par-3 golf course, shuffleboard court and a dance floor. Properties listed for sale ranged from $45,000 to $222,000.

A neighbor, Pat Roth, told Los Angeles television station KNBC that Tran said he was a ballroom dance instructor in the past and would sometimes show up to dances at the senior community.

Hemet police had no records of any incidents involving Tran in the community or calls for service at his home, Reyes said.

Authorities have shared little about Tran, who owned a trucking company in Monterey Park from 2002 to 2004, according to California business records.

He was once arrested for unlawful possession of a firearm in 1990 and had a limited criminal history, Luna said. The sheriff could not immediately say if a gun arrest at a time when firearms laws were different would have barred him from owning weapons.

Tran’s ex-wife told CNN they married soon after they met at Star Ballroom, where he offered to teach her to dance for her free. He would become upset if she missed a step dancing, but was never violent toward her, she said.

They divorced five years later, citing irreconcilable differences, Los Angeles Superior Court records show. The couple did not have children, said they had no community property and neither side had to pay alimony.

While she is named in court papers, she asked not to be identified because of the sensitivity of the case.

Tran may have gone on to kill many more if not for the heroics of Brandon Tsay, who was working at a dance club in nearby Alhambra when Tran entered about 20 minutes after the Monterey Park massacre.

Tsay reacted swiftly and disarmed Tran in a short struggle captured on surveillance camera at the Lai Lai Ballroom.

“The person was cocking his gun," said his father, Tom Tsay, co-owner of the studio. "He saw the opportunity and he just jumped.”

Gov. Gavin Newsom met Monday with Tsay, 26, who works part-time at the dance club founded by his grandparents, and said he was a true hero.

“This remarkable young man who without any hesitation — though with moments of fear — took it upon himself to save countless lives,” Newsom said. “Who knows how many lives he saved.”

Brandon Tsay said he was proud of his actions but did not want to discuss them so the focus would stay on the victims.

"Some of these people I know personally,” a somber Tsay said outside his family’s home. They come to our studio. It’s a tight-knit community, and I hope they can heal from this tragic event”