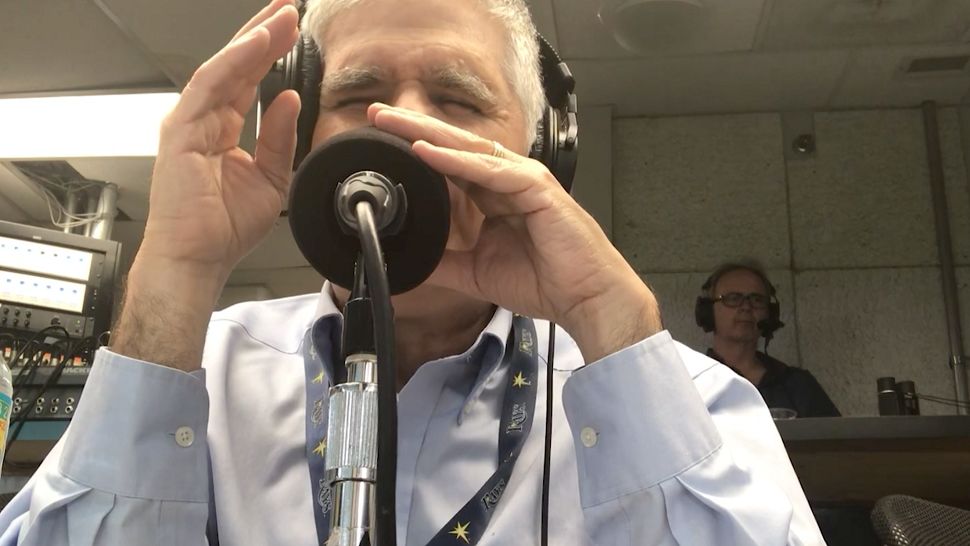 Rays radio broadcaster brings his own vision to the game

ST. PETERSBURG, Fla. - America’s pastime is a site to behold. But for someone like Enrique Oliu seeing the game is not an option.

Enrique has been blind since birth. Very early on in his life, Enrique knew something was different.

“You’re not running and doing the same things that your brothers are doing, like getting up on the trees on the farm and stuff like that,” said Enrique.

Born in Nicaragua, Enrique would leave for Costa Rica at the age of five. When he was just 10 years old, Enrique moved to St. Augustine to attend the Florida School for the Deaf and Blind. That was where his passion for radio and sports was born.

“All of us used to sit around the radio at the blind school and listened to the radio voices,” said Enrique. “Fortunately, there were no stations at night that would come in around town, so you could get every station from New York, from wherever. Flip the dial and listen to a Marty Brennaman (of the Cincinnati Reds radio), listen to a Milo Hamilton doing the Braves (he called Hank Aaron’s record-breaking 715th home run), or Marv Albert doing the Knicks or Rangers.”

Enrique fell in love with radio and sports-casting. He set the goal of becoming a radio sportscaster…using the words of his father to inspire him.

“My dad always said ‘what do you like to do? Go for it and just try to blaze trails. Don’t be like anybody else,’” said Enrique.

Enrique has enjoyed a colorful career in radio: from minor league baseball to the Tampa Bay Storm and even a season with the Bucs Spanish broadcast. But nothing compared to the chance of a lifetime in 1998 – when Enrique became the color commentator for one of MLB’s expansion teams – the Tampa Bay Devil Rays.

“I remember listening to that first pitch,” said Enrique. “And I thought, ‘this is pretty neat.’ For me it was just amazing because I’m there!”

Enrique’s partner for most of his 21 years with the Rays has been Ricardo Taveras. It was a perfect match right from the beginning.”

“We have excellent communication,” said Ricardo, who is in his 17th season with the Rays. “I have never had a problem with Enrique. He’s amazing.”

One of the reasons Enrique is so accomplished in radio is that he is aware of all of his surroundings. He doesn’t see the game. He feels it.

“You have to take everything into consideration,” Enrique said. “The fans, play-by-play, who is batting, who is not, who is pitching, who is running, all of those things.”

Enrique has built his knowledge of the game through relationships – from managers, to television personalities and fellow radio commentators around the league.

He also knows all of his stats and storylines by memory.

“I call him the human computer,” said Ricardo.

But one of the biggest reasons for his success has been the help of his wife, Debra. She sits to Enrique’s right during home broadcasts at the Trop. Passing along information to her husband in between at-bats.

“It’s just kind of evolved,” said Debra, who has been married to Enrique for nearly two decades. “And since it’s evolved I’d like to think that I am the only one that can do it the way he likes it.”

Debra works with Enrique at home to prep for games and also goes through the lineup before each home game to make sure he is ready for the broadcast.

“If someone else is in the booth with him, it’s not the same because they don’t know what he wants to hear, what facts he wants to hear for that situation, so it just kind of fits perfectly.”

“That’s probably why I got married late in life because I had to find someone who liked this stuff,” said Enrique with a smile. “Everyone else fired me because I was spending too much time at the ballparks.”

Enrique also works as a translator at Hillsborough County’s Public Defenders office. While he may eventually retire from his day job, he wants to keep going with the Rays for a long time.

And Debra is just fine with coming to the ballpark with him. After all, full retirement wouldn’t work for them.

It is easy. It’s a burning passion for the little boy from Nicaragua who chose to blaze his own trail through the dark using the light from his dreams.