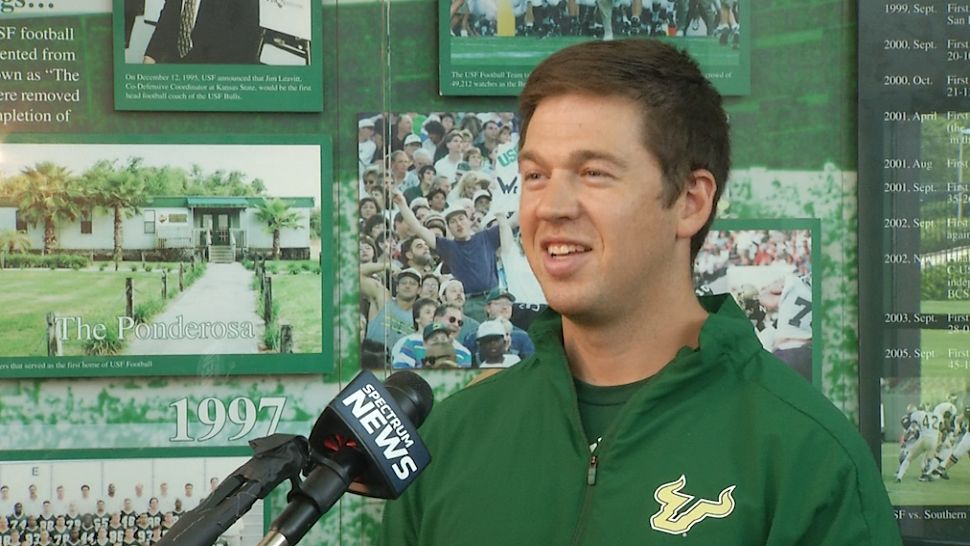 TAMPA, FL. - USF Football is hoping to revive its offense this season. The man entrusted with that job is Charlie Weis Jr.

“We’ve got a lot of work to do, we obviously haven’t gotten on the field with our guys, yet, but I certainly believe in the system that we are going to run,” said Weis, who is entering this third season overall as an offensive coordinator.

The 27-year-old has been coaching since he was 18. He is considered a rising start in coaching and boasts a resume that includes time at both Florida and Alabama, as well as with the Atlanta Falcons.

“Just able to learn a lot growing up in high school and even in college doing the same thing as a student assistant,” said Weis.

Weis’ football education began under his father – Charlie Weis – who is best known as Tom Brady’s first offensive coordinator with the Patriots – winning three Super Bowls in four seasons. He’s also had the tutelage of Lane Kiffin, himself a former young hotshot coach. Kiffin hired Weis in 2018 to be his offensive coordinator at FAU at just 24 years old.

“When everybody else was playing in college, Charlie was already coaching so that’s why age doesn’t really matter in this situation,” said Kiffin during 2018 C-USA Media Day.

“Any time there was something that I need advice on or needed to hear from him, I would always ask him and he would give me great advice or point me in the right direction of what to do,” said Weis, who says he owes a lot to the bad boy of college football coaching.

With Kiffin behind him, Weis orchestrated one of the most explosive offenses in college football.

“We averaged 78 plays a game at FAU last, which top 15 in the country and scored something like 36 points per game,” said Weis.

“Michael looked at me and said ‘I think we would regret for the rest of our life if we didn’t hire him,’” said Scott, himself the son of a former coach. “Man, how sharp he is and his knowledge of the game – he is very similar to me, he has grown up around it.”

Weis and Scott will work together to restore a once high-powered and feared offense. One thing both are committed to is a fresh start for the players.

“I truly want them all to have that first look and a fair chance, not coming in and labeling players, ‘he can do this, he can’t do that’, I want to go in with open eyes and see what they can do,” said Weis.

All good things take time. But Charlie Weis Jr. expects to light a fire under this Bulls’ offense. After all, success is the only thing known by this coaching prodigy.