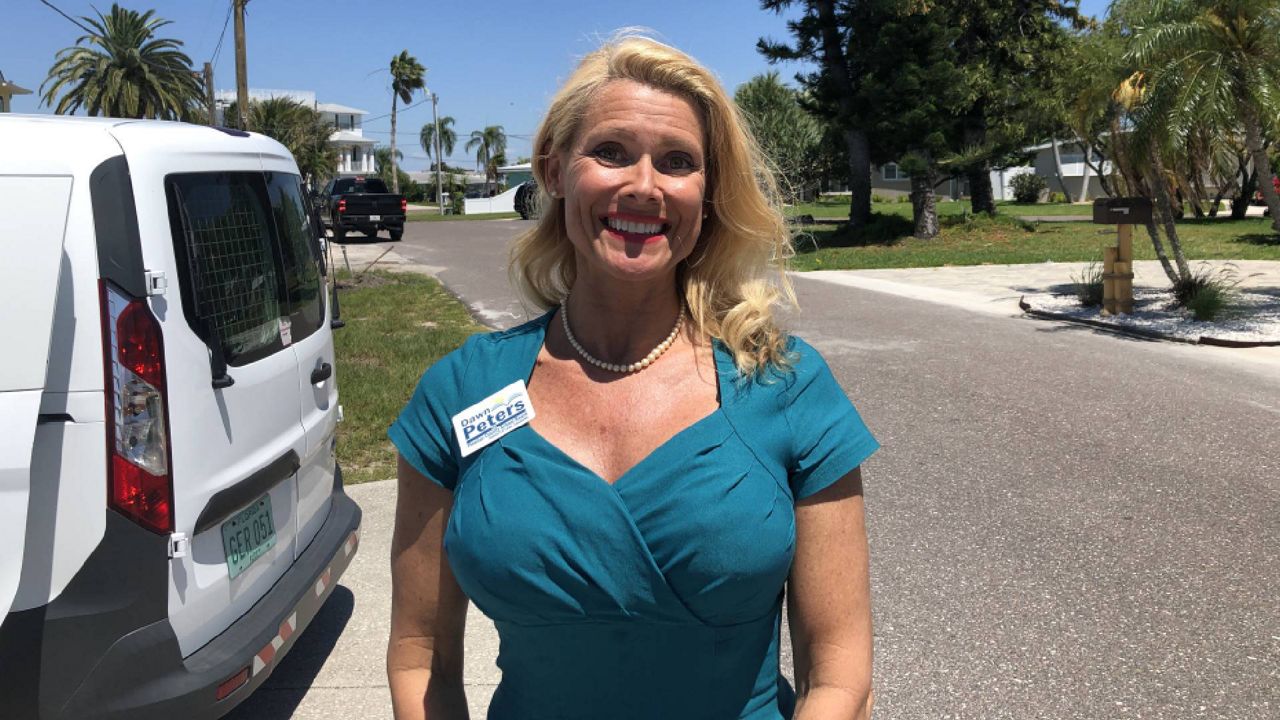 PINELLAS COUNTY, Fla. — Issues like critical race theory and discussions about sexual orientation in the classroom have dominated the headlines when it comes to public education in Florida this year, and it’s an issue that conservative-leaning voters seem to care most about leading into school board races this year.

“What’s your take on critical race theory?” a Redington Beach resident asked Pinellas County school board candidate Dawn Peters last week as she was going door-to-door to campaign in her neighborhood.

“No,” she replied. ”I would like to just really see a return to basic education.”

Peters is now running for the District 3 countywide seat on the Pinellas school board this year, where she is running against former state lawmaker Carl Zimmermann and educator Keesha Benson on a “back to basics” platform.

“Reading. Writing. Arithmetic,” she told another voter she encountered when asked about what she’s running on. A supporter of Gov. Ron DeSantis, she told the prospective supporter that it would be important for her to be on the school board to ensure that some of DeSantis’ backed education bills are successfully implemented when they go into law later this summer.

One of those bills (HB 7) creates guidelines involving race-based discussions in businesses and schools. It’s also associated with banning critical race theory, which has not been taught in K-12 Florida public schools.

Peters acknowledges that's the case, but says that the introduction of CRT into the classrooms is “very subtle.”

“If parents are expecting their kid to come home with a history book that says, ‘critical race theory,’ it’s not going to. It’s going to be an underlying message delivered through what teachers are teaching through the work that is being done in the classroom, whether it’s handouts (or) whether it’s online.”

The race is nonpartisan, but Peters participated in a candidate forum of school board candidates at the St. Petersburg Republican Club’s meeting last month, where she called herself “an advocate for parental freedom and medical freedom.”

While critical of CRT and sex education in the classroom (though she says that reproduction education is important), Peters also emphasized at the forum how much she appreciates what is currently going on in Pinellas County schools.

“There are a lot of amazing programs and things that our schools do,” she said. “My daughters went all the way through Pinellas County schools, from kindergarten to their senior years. So obviously, I love our schools.”

But she had issues with the school board during the pandemic.

“I was so active in my kids' schools from the time they were in preschool all the way up to when you kicked me out last year,” Peters said at a Pinellas County School Board meeting last June.

School board races have become a hot political issue in 2022.

St. Petersburg based political consultant and talk-show host Barry Edwards says that people from both sides of the political aisle have fought during the pandemic to impose their values in the schools, but he believes that Republicans have benefited more by framing such efforts as “overreach by the left on parental rights — that the parents should have input on their children’s education.”

“We saw that last year when (Democratic gubernatorial candidate) Terry McAuliffe in Virginia said that the parents shouldn’t have a stake (in the schools),” Edwards says. “That cost him the election. That was the pivotal turning point.”

Seizing McAuliffe’s defeat last year to Republican Glenn Youngkin when education appeared to be a major issue, conservative organizations have been pushing to make school board races partisan. However, an effort to do so in Florida died this year in a legislative committee, and Peters says she is glad that’s the case.

“I do not agree that we should have partisan races on our school board,” she said. “I feel like if you want to know what that person stands for, go to their website. Talk to them. Talk to people who know them. But our children should not be a political issue.”

Despite the media's focus on parental rights in schools, the vast majority of parents think that their child’s school and its teachers have handled the pandemic well.

A recently released NPR/IPSOS poll of 1,0007 U.S. parents with at least one child between the ages of 5 and 18 found that more than 8 in 10 said that their child’s school has handled the pandemic well (82%) and has clearly communicated plans with parents (82%).